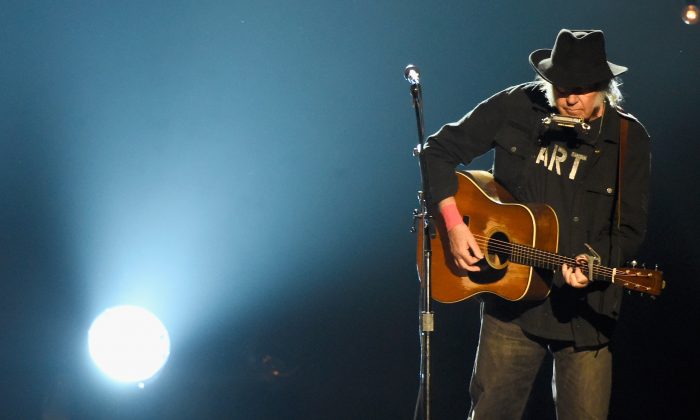 Neil Young wrote Rockin' in the Free World – but what world is Donald Trump in? (Frazer Harrison/Getty Images)
Life & Tradition

Donald Trump and Neil Young: What That Song Communicates

The use of Neil Young’s Rockin’ in the Free World (1989) at Donald Trump’s presidential campaign announcement this week – and the response from Young – provided only the most recent example of an ancient and powerful tactic: the recruitment of music to political ends.

It also demonstrated, again, the perils and pitfalls of doing so without full awareness and critical consideration. Ronald Reagan’s use of Bruce Springsteen’s Born in the USA was similarly problematic in 1984, and more recently Mitt Romney and Scott Walker have also faced controversy over their use of music.

Much commentary has focused on issues of permission, legality, the political misappropriation of music and Neil Young’s preferred political candidate (self-declared socialist Bernie Sanders). Behind that, however, is another story – one more powerful than is commonly acknowledged, and certainly more beautiful.

The irony of a self-declared economic and social conservative using an economically and socially progressive protest song to announce a presidential campaign is obvious. Even the most cursory examination of the song’s lyrics and music video (below) reveal themes of homelessness, drug addiction, anti-consumerist sentiment, and an ironic reference to former US president George H. Bush’s campaign pledge to create a compassionate citizenry.

Clearly, on many levels this was a poor match for the speech Trump was about to give, with its themes of revivifying US military and economic power on a global scale. What is less clear is why Trump or his campaign team opted for this particular song in spite of the obvious.

To be sure, a superficial hearing of the song might discount the lyrics of the verses, and focus on the ostensibly triumphalist chorus (“keep on rockin’ in the free world”).

Obliviousness to the song’s text and themes is one possibility, and I will leave it to others to ponder the implications and conclusions that might be drawn about the kinds of people who run for office in the modern era.

Another possibility is that on a more fundamental level, the song communicates in ways that transcend the protest message, making it a worthwhile choice for Trump’s purposes despite the lyrics. And that’s where the power of music becomes apparent.

Some basic musical knowledge is important. Being able to articulate how music works can enhance our ability to understand its effect on us, and in this case, how it is being used to manipulate us.

In an ideal world, everyone would know two related terms from music theory: major and minor.

Much of music can be talked about without technical terms (pitch and rhythm are as good as universally understood, and can be discussed using words like higher, lower, faster, slower), but the concepts of major and minor harmonic “colours” are not common knowledge.

Of course this dichotomy expands into a complexity of psychological shadings only limited by the full range of human emotions and thoughts – and perhaps not even then. But for the purposes of looking at this song, minor as emotionally negative and major as positive are useful ideas to start with.

At first glance, the musical contribution to the psychology of the song is very clear. The socially dark issues of the verses are accompanied by a repeated pattern that emphasises mostly “dark” E minor chords, low in the electric guitar.

Let’s look at the following, from the song:

I see a woman in the night
With a baby in her hand
Under an old street light
Near a garbage can
Now she puts the kid away, and she’s gone to get a hit

The gravity of the issues, the despair of the homeless mother’s situation here, followed by the cynical takes on culture and politics in subsequent verses, all find a corollary in the psychologically angst-ridden harmonic and rhythmic grittiness.

But if one takes out the lyrics to the verses, music’s essential intangibility allows different psychological readings. Those same gritty chords, and defiant – almost angry – harmonies, could also suggest a kind of implacable strength, and Trump certainly tried to convey strength in the face of adversity and challenge in his speech.

A perfect fit! It’s this slippery and elusive semantic quality to music that makes it so powerful, as it can be used for multiple purposes and to generate a variety of emotional responses.

The very fact that Trump was able to create an impression of resolve and strength through this music, despite the meaning of the song lyrics, says something about the power of music. Is it the music accompanying the lyrics? Or do the lyrics accompany the music in this context?

The, erm, trump card, however, is the chorus, which bursts free of negativity by reversing the harmonic polarity and emphasising a closely related major key, belting out the words “keep on rockin’ in the free world”.

The darkness of minor followed by the release into major, with reference to rock and the free world, is a kind of musical sugar rush that Trump instinctively knew would stimulate endorphins in listeners, connecting him to positive emotional responses in a fascinating neural process.

Of course the real meaning of the chorus, with its repetition of “keep on rockin’ in the free world”, is far more poignant.

Some may hear a cynical exhortation to Americans to bury their heads in the sand and keep on rockin’ in the (so-called) free world: misappropriation identified, end of story.

And that’s where much commentary might end, which is unfortunate, because there’s more.

There are clues that the song is underpinned by a sense of beauty and a desire for the problematic issues to be reconciled within a political context that Young genuinely believes in, even if it might be broken.

I hear a chorus that isn’t cynical, that wants to believe in rockin’ in the free world, but that needs things to be better first.

The tiniest details in music often create the largest emotional response, and for me there are two details in the chorus that are crucial.

Close listening reveals a subtle but meaningful connection between specific words and specific sounds. The first is rockin’, or even more accurately, the syllable “rock”. The word itself evokes the hard-edged raw power of the entire rock’n’roll genre – electric guitars, tough-guy bands and a defiant attitude.

But here the word falls on a pitch that doesn’t belong to the harmony below it; after a series of repeated Gs, in a bar of G major, “rock” falls on an F sharp, anticipating the harmony of the next bar (D).

It’s the momentary dissonance, (lasting only a split second), that changes everything. To me it’s a sweet dissonance, full of yearning, and I find it meaningful that it is combined with the work “rockin'”, the supposed musical antithesis of vulnerability.

The other important moment is “free world”. If the song were truly triumphalist then these words would sound and feel celebratory.

But if you listen closely you might again hear a kind of dissonance. Not a harsh one, a poignant one.

Now that harmony has changed to D, the melody reverts to the pitch G for “free” and descends to E for “world”. Both pitches are dissonant to the harmony of D, but not brutally so. The G is a very common type of suspension that often resolves a certain way (back to the F sharp), but here it doesn’t, it falls further, down an E.

Both notes could be “resolved” within the harmony, but aren’t. This subtly draws attention to the words “free world”, and creates a sense of slight unease around them. The musical effect is that of sad beauty (to my ear at least, and it’s only one’s own ears one can ever base a judgement on), and a sense of unresolved yearning.

I think everyone who hears this song is probably aware of these musical elements on some level, and everyone responds to them differently, sometimes radically so. By articulating my thoughts, I’m doing nothing more important than presenting my response to the music.

The particularities of my response are not as important as the fact that I have a response, that we all probably do, and that it’s worth reflecting on what that response is and what it means to us.

The Branding of an American President

My aim then is to observe how central music is to this whole controversy, and to say that it matters. The centrality of music here speaks to the power politicians ascribe to it (without acknowledging so publicly of course, that might have funding and education implications), and it speaks to the profound and primal power it has over all of us.

Rather than seeing music as secondary to text, as secondary to legal issues, as background entertainment, as a political tool, it becomes clear that music here is something else, something intangible but enormously important.

It’s music that Trump was using to create the impression of power and strength, and the fact that it’s so effective is why Neil Young is so upset – he would have preferred his creativity be used to support a different candidate, if at all.

One last musical comment to conclude: it’s very hard to hear much in the way of strongly characterised major sonorities in this song. The occasional C major chords seem secondary and weaker next to the closely-related but somehow more “politically realistic” (in this context) E minor chords. Also, the G major chorus tends back toward E minor at the end of each phrase.

Overall, the supposedly happy major colours are always ambiguous, tainted. In some ways the musical irony is as powerful as the textual irony: for a song that is supposed to celebrate the announcement of a presidential contender, it is surprisingly tinged by melancholy.

And that melancholy puts the whole event this week into a different, slightly sadder frame. The power of music is there, but as is too often the case, it’s being ignored by a noisy political discourse.

It’s a good reminder to step back and listen, and reflect on how interesting it is that there is something beautiful at the centre of this familiar and unfortunate political story.

Liam Viney is Piano Performance Fellow at The University of Queensland. This article was originally published on The Conversation. Read the original article.