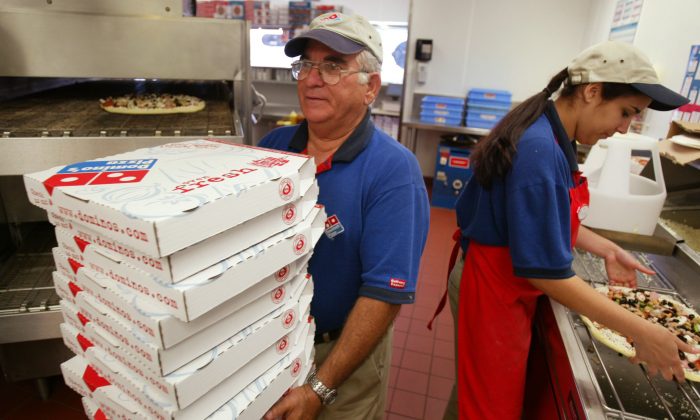 Domino’s Pizza announced Monday that it will pay customers to pick up their own pizza just weeks before the Super Bowl begins amid a nationwide shortage of workers and supply chain disruptions.

The Michigan-headquartered restaurant chain will offer customers a $3 credit if they choose online-ordered carryout over delivery between now through May 22, 2022.

The $3 credit can be used on a future online carryout order placed the following week, as long as customers place a minimum purchase of $5 before tax and gratuity.

“It takes skill to get pizza from a Domino’s store to your door,” said Art D’Elia, Domino’s executive president and chief marketing officer. “As a reward, Domino’s is giving a $3 tip to online carryout customers who take the time and energy out of their day to act as their own delivery drivers. After all, we think they deserve it.”

The announcement comes just ahead of the Super Bowl on Feb. 13, at SoFi Stadium in Los Angeles, which Domino’s says is “one of the busiest days of the year for pizza” and a time when it typically sells about 2 million of the Italian delights.

It also comes amid a labor shortage in the United States, where the economy is running around 4 million workers short of its pre-pandemic level, despite a near-record 10.6 million jobs available.

In November, the number of Americans quitting their job increased to a series high of 4.5 million. Workers handed in their resignations across multiple industries including the food service, health, social care, and the transportation industries, according to data from the Bureau of Labor Statistics.

The nationwide labor shortage has prompted employers across the country to raise wages, implement attractive bonuses, and offer competitive compensation in an effort to pull in new workers.

Last year, Starbucks, Costco, Walmart, Target, CVS Health, and Walgreens Boots Alliance were among some of the companies who announced they would be raising the starting wage for employees to $15 an hour in an effort to recruit more workers.

Meanwhile, inflation levels have risen to a 40-year high of 7 percent in the United States, affecting both consumers and restaurants, many of whom are struggling with the rising prices of basic necessities such as meats, cheese, and grains.

Earlier this month, Domino’s announced that it will be cutting down the number of chicken wings in promotional offers as it deals with increases in food costs.

The pizza franchise plans to offer eight pieces instead of the usual 10 in its $7.99 carry-out deal.

“We expect unprecedented increases in our food basket costs (for fiscal 2022) versus 2021 of 8 percent to 10 percent, which is 3 to 4x what we might normally see in a year,” CEO Richard Allison said at ICR Conference, Reuters reported.

Despite facing challenges with rising prices and worker shortages, Domino’s expects to see an earnings growth of 12.9 percent and 7.1 percent increase in revenues this year, according to Wall Street analysts surveyed by Refinitiv.