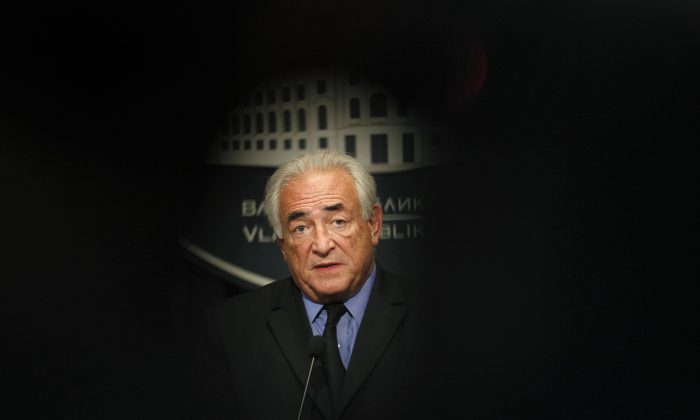 Ex-IMF chief Dominique Strauss-Kahn speaks during a press conference after his meeting with Serbia's deputy PM Aleksandar Vucic in Belgrade, Serbia, on Sept. 17, 2013. The French economist known universally by his initials DSK faces up to 10 years in prison and a 1.5 million euro ($1.7 million) fine on charges of aggravated pimping, along with over a dozen other French and Belgian businessmen and police officers at the trial beginning Monday at a courthouse in the northern French city of Lille. (AP Photo/Darko Vojinovic)
Europe

The trial for former IMF chief Dominique Strauss-Kahn for “aggravated pimping” charges started Monday in France–four years after a sex scandal in New York City cost him his job and hopes to run for the French presidency.

Strauss-Kahn appeared in court Monday to face accusations for taking part in an international prostitution ring to provide him with prostitutes at hotels in France and in the United States. He appeared in a court in Lille, France.

In the 2011 New York sex scandal, a maid at the Sofitel New York Hotel alleged that the then 62-year-old attempted to rape her, but the prosecution in the case pointed out doubts in the accuser’s case. Even though the case was dismissed, the scandal will likely negatively impact the jury’s perception of him.

Dr. Carole Lieberman, a bestselling author and forensic psychiatrist in the department of psychiatry at UCLA, told Epoch Times describes the uphill battle Strauss-Kahn faces in the trial.

“Although the case against Dominique Strauss-Kahn for participating in a prostitution ring may well be politically-motivated, his history of having been charged with the sexual assault of a hotel housekeeper in New York, will taint the court’s perceptions of him,” Lieberman said.

Strauss-Kahn faces up to 10 years in prison and a 1.5 million euro ($1.7 million) fine. His trial will last about three weeks, and he won’t testify until next Tuesday.

Lieberman added: “It is not a far stretch that a man, who has so little respect for women that he may have assaulted one in his hotel room, would also be capable of exploiting women as prostitutes. This shadow hanging over him may be unfortunate, as the New York sexual assault charges were dropped, and he seems to have been inadvertently ensnared in the French prostitution ring charges.”

It’s not illegal to pay for sex in France, but it’s against the law to solicit or to run a prostitution business. Hundreds of reporters are covering the trial, making it one of the highest-profile cases in France in years.

During the New York scandal, Strauss-Kahn said the sexual encounter with the maid consensual but described it as “a moral failing.”