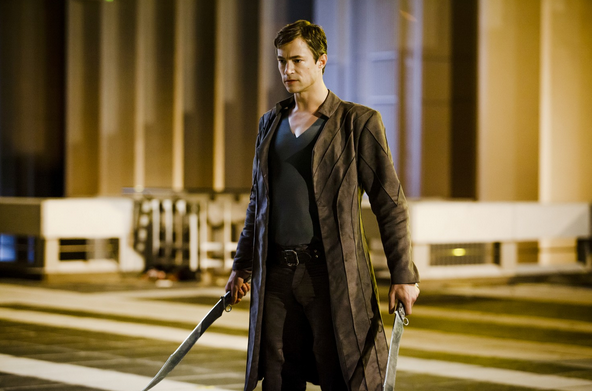 The show will air on SyFy following the premiere of season 2 of Defiance.

The first episode is set 25 years after the end of the film, or “the Extinction War,” when an army of lower angels, assembled by the archangel Gabriel, waged war against mankind.

“The archangel Michael, turning against his own kind, chose to side with humanity. Rising out of the ashes of this long battle are newly fortified cities which protect human survivors,” SyFy says.

“At the center of the series is the city of Vega, a glistening empire that has formed from the ruins of what was once Las Vegas.”

Alex Lannon (Christoper Egan, “Home and Away” and “Kings”), a rebellious soldier in the Archangel Corps, an elite unit responsible for the protection of Vega’s aristocracy. Through his assignment to House Riesen, Alex developed a secret relationship with Claire Riesen, daughter of the Lord Of The City (General Riesen).

Archangel Michael (Tom Wisdom, “300”), a legendary warrior throughout history, was the only angel to take humanity’s side during the Extermination War, turning against his own kind. Always inscrutable, Michael has watched over Alex his entire life, but is just now beginning to understand the complexities of having such a close relationship with humans.

Claire Riesen (Roxanne McKee, “Hollyoaks”), the daughter of General Riesen and next in line for Lord of the City. She is beloved by the people and always does her best to watch out for the city’s lower classes despite her sheltered and privileged upbringing. Although she is in love with Alex, Claire is torn when her father insists that the only way to help the city of Vega move past the caste system she hates so much is to marry William Whele.

General Risen (Alan Dale, “Lost” and “Once Upon a Time”), who led humanity in the Extermination War twenty-five years ago, and today leads the city of Vega as Lord Of The City. A paragon of strength and duty, Riesen helped build Vega, and imposed a class system as a way to keep order and ensure the city’s survival.

David Whele (Anthony Stewart Head, “Buffy the Vampire Slayer” and “Merlin”), the secretary of commerce, the second most powerful leader in the city. A ruthless and cunning political operator, the ambitious David is always on the hunt to keep or grow his power… by any means necessary.

William Whele (Luke Allen Gale, “Monroe”), the son of David, and Vega’s Principate, or religious leader of the Church of The Savior, the religion that has grown since the Extermination War all based around the concept of “The Chosen One.” Kind hearted to his flock, he is very much in love with Claire Riesen and welcomes their betrothal, even if he admits it is a political move by their fathers.