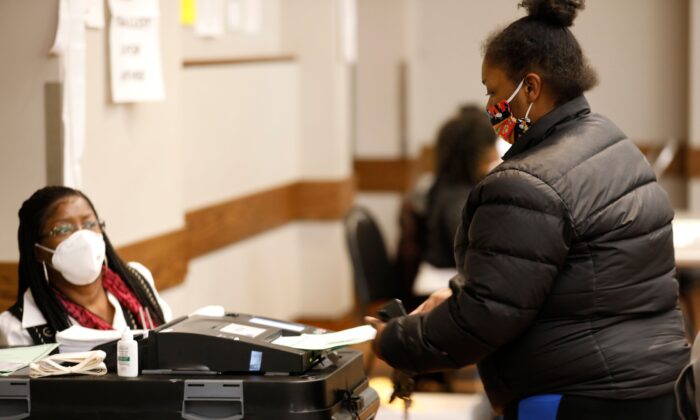 A voter puts their ballot in the tabulation machine after voting in the 2020 general election as seen in a file photo. (Jeff Kowalsky/AFP via Getty Images)
By Jack Phillips

Election officials in Luzerne County, Pennsylvania, reported issues with voting equipment at polling places on Tuesday, prompting a response from Dominion Voting Systems saying that there was a ballot screen error regarding the viewing screen’s header.

Dominion Voting Systems told The Epoch Times that “Luzerne County’s election director has confirmed that there is a ballot screen error that is confined to the header on the viewing screen of the machine, and that all ballots are printing correctly with the Republican header and the Republican primary election races.”

The firm then noted that Luzerne County officials have assured the public that “all ballots will be correctly counted,” adding: “We regret any confusion this has caused.”

It came after voters told PAHomepage and local officials that they reported incorrect labeling on electronic ballots in Luzerne County, located in the northeastern part of the state.

According to some voters and officials, speaking to WNEP, when Republican voters approach the machine to vote, the introduction page says, “Official Democratic Ballot.” A polling place in Kingston Township confirmed to the news outlet that it was forced to pause voting on Tuesday due to the issue.

“We want to assure everybody that what happens is when you are a registered Republican, we have a specific code for that ballot. And once we punch that code in, even though the header says something like ‘Democratic ballot,’ it’s actually for the races that are in the Republican party,” Morgan said, adding that the votes will be counted correctly.

Matthew Vough, a Democrat running for a county council term, told the Times Leader that voters told him that his name didn’t appear on their ballot. He said that some Democrats got the Republican ballot.

Vough added to the paper he would suggest that Luzerne County end its contract with Dominion during the next council meeting.

Morgan, meanwhile, explained to PAHomepage that “there is no evidence of any of this problem on the mail-in ballots which were produced from that file” and added that the county is “still working with Dominion to get an explanation as to how this coding error occurred. They were as surprised about it as we were.”

When asked if there was any way it was the fault of the county, Morgan said, “No.”

“We’re doing signs, we’ve contacted each of the judges of elections. We’ve asked them to place a sign at their voting place. We’re giving Republican voters the opportunity to vote by provisional or emergency ballot if they choose.”