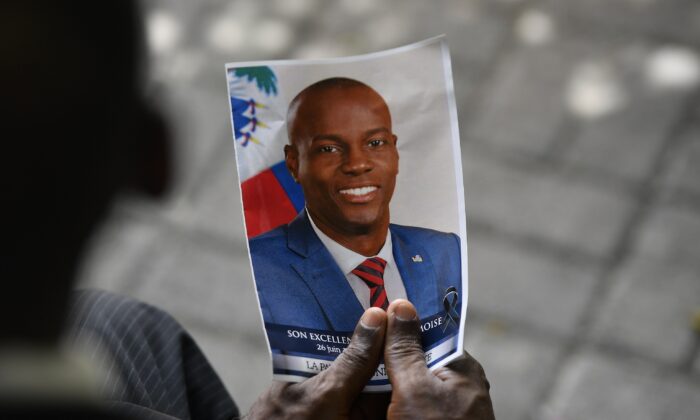 A person holds a photo of late Haitian President Jovenel Moise during his memorial ceremony at the National Pantheon Museum in Port-au-Prince, Haiti, on July 20, 2021. (Matias Delacroix/AP Photo)
Americas

SANTO DOMINGO, Dominican Republic—Authorities in the Dominican Republic told The Associated Press on Monday that they have detained a key suspect in the killing of Haiti’s president with help from the U.S. government.

An official not allowed to speak publicly about the case said Rodolphe Jaar was being handled as a U.S. prisoner and was arrested under instruction by U.S. authorities.

The official said Jaar was arrested Friday when he tried to enter the Dominican Republic, which shares the island of Hispaniola with Haiti.

Jaar has not been formally charged. It wasn’t immediately clear if he had an attorney or would be extradited to another country.

U.S. officials declined to comment, saying the investigation is continuing. Haitian authorities could not be reached for comment.

The Dominican Republic’s Ministry of Foreign Affairs said it was waiting for authorization to speak on the case.

Jaar’s arrest came just days after Mario Antonio Palacios Palacios, who is one of the main suspects in the July 7 slaying of President Jovenel Moïse, was extradited to the United States to face U.S. charges in the case.

Palacios, a 43-year-old former Colombian soldier, is charged with conspiracy to commit murder or kidnapping outside the United States and with providing material support resulting in death, knowing or intending that such material support would be used to prepare for or carry out the conspiracy to kill or kidnap. He was detained in Jamaica in October.

Jaar is one of more than 40 suspects held in the case. He was born in Haiti and has a college degree in business administration, according to court records. He is not a U.S. citizen.

Jaar was indicted in 2013 in federal court in South Florida on charges of conspiring to smuggle cocaine from Colombia and Venezuela through Haiti to the U.S. He pleaded guilty and was sentenced to nearly four years in prison, according to court records.

At Jaar’s 2015 sentencing hearing, his lawyer told the court that Jaar had been a confidential source for the U.S. government for several years before his indictment. Jaar also agreed to cooperate with federal authorities and asked for a lighter sentence, saying he had a wife, 1-year-old child and elderly parents.

On Saturday, Claude Joseph, who briefly served as Haiti’s interim prime minister following the president’s assassination, tweeted that more arrests were pending. He accused Haitian authorities of not investigating the case in an attempt to thwart justice but praised the international community.

“The international cooperation we have always been asking for is becoming more active every day. The crusade will not stop,” he wrote.