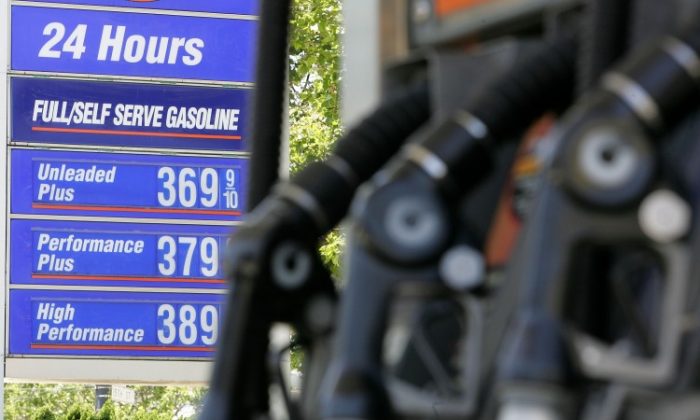 Gasoline prices above $3.50 per gallon are seen at a service station in San Francisco in this file photo. Prices at the gas pump fluctuate on a daily basis, and they continue to climb in 2013, seeing a $0.26 average increase in the last two weeks alone to $3.61 per gallon. (Justin Sullivan/Getty Images)
US

Gasoline prices at the pump remain high despite recent reports showing a trend of increased domestic production and lower consumption.

In 2012, annual domestic oil production reached a level not seen in over a decade. Industry leaders credit innovation for the increase.

“There is a new energy reality of vast domestic resources of oil and natural gas brought about by advancing technology,” said Karen Moreau, executive director of the New York State Petroleum Council at the American Petroleum Institute (API), at a Feb. 4 teleconference. “They have helped put the U.S. in a position to become a global superpower on energy.”

Hydraulic fracturing, or “fracking”—an oil harvesting process that involves injecting pressurized water deep into the ground to extract trapped oil from rock—has yielded significant returns in the past few years. The technology has allowed the industry to tap previously unobtainable oil supplies, a major factor in realizing a 28-percent increase in production since 2008, according to a report in the San Antonio Express-News.

Conversely, demand for petroleum in the United States has dropped, with domestic use of petroleum products decreasing by approximately 2 percent in 2012—the lowest point in 16 years, the paper reported.

Prices at the gas pump fluctuate on a daily basis, and they continue to climb in 2013, seeing a $0.26 average increase in the last two weeks alone to $3.61 per gallon.

With increased production and lower demand, basic economics dictates that gasoline prices should be falling, not rising. However, developing countries such as China and India are demanding more, and global demand for oil is increasing faster than domestic production can offset.

“All of these prices are reflected globally,” said API senior economic advisor Rayola Dougher. “The U.S. is just a piece of it.”

Environmentalists may see this growing demand as a reality check to calls for more domestic production.

“It really debunks the myth of ‘Drill, Baby, Drill,’ that if we just produce more oil, prices will stay low or go lower,” said Michael Marx, director of the Sierra Club’s Beyond Oil campaign, according to the Express-News.

China’s demand for oil rose by 3.4 percent in 2012, with a demand of 9.68 million barrels per day on average, according to Platts energy information service, reported the paper.

Oil production in the United States is projected to rise in output by an additional 14 percent in 2013, according to the International Energy Agency. If the trend continues, the United States could potentially surpass Saudi Arabia by 2020, reported CNBC.