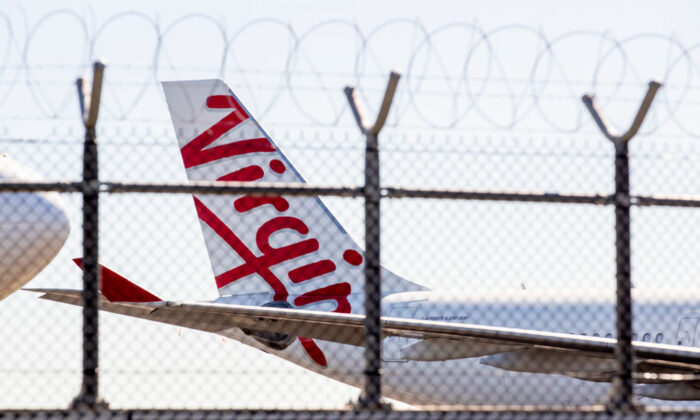 Grounded Virgin planes are seen parked on a tarmac at Brisbane Airport on April 21, 2020 in Brisbane, Australia.(Photo by Jono Searle/Getty Images)
Australia

The cost of domestic airfares is peaking after it more than doubled from April 2022, Australia’s consumer watchdog has revealed.

The Australian Competition and Consumer Commission’s (ACCC) latest report predicted the upward trend will continue until at least October due to the growing demand for travel, high jet fuel prices and reduced capacity.

According to the report, the price index of cheapest discount airfares jumped to 73.8 percent in August 2022, representing a rise of 56 percent over four months.

“After about 18 months of historically low airfares, the cost of domestic flying has risen sharply in response to strong demand, temporary capacity reductions and very high jet fuel prices,” ACCC Chair Gina Cass-Gottlieb said in a media release on Sep. 7.

“Discount economy airfares in August were at their highest point in almost two years.”

“In these circumstances, more than ever, the level of competition between airlines is incredibly important to maintain pressure on ticket prices and service levels across the industry.”

Australian airline Rex, which had better performance than the other airlines in terms of punctuality and cancellations rate, attributed its success to retaining its staff despite reduced flying over the past two years.

As the aviation industry struggled to meet demand due to workforce shortage and ill staff, a growing number of customers are frustrated at the increase in delayed and cancelled flights, the report revealed.

“Social media was inundated with complaints from consumers about their travel experiences. For some, the complaints related to long queues at security or poor communication from the airlines. For others, there were missed connecting flights, missed events, holidays cut short, lost baggage, and in some cases, nights spent sleeping in airports when flights were cancelled, and last-minute accommodation wasn’t available,” the report said.

While public criticism extended to Jetstar and Virgin, the criticism was most predominantly directed towards Qantas, the report said. The report made a note that customers hold higher expectations from Qantas due to its “typically higher airfares, brand reputation, and the way that the airline promotes itself as representing Australia overseas.”

Cass-Gottlieb noted that the consumer watchdog is aware of the issues and has been engaging closely with airlines to understand the sources of the problems.

The report estimated that 4.7 million passengers flew domestically in July, the highest number since the beginning of the pandemic.

Queensland became a particularly popular travel destination in July 2022. While travel between Canberra and the Gold Coast almost doubled compared to July 2019, the number of passengers flying between the Gold Coast and Melbourne and Adelaide also surpassed pre-pandemic demand.

“Pent-up demand for leisure travel, particularly from people in the colder southern states, continues to drive the recovery in passenger numbers. Demand on routes between Canberra, Melbourne and Sydney has lagged behind, in part due to the slower recovery of corporate and business travel,” Cass-Gottlieb said.