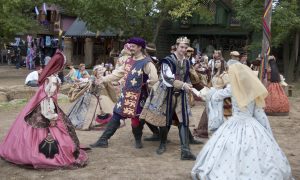 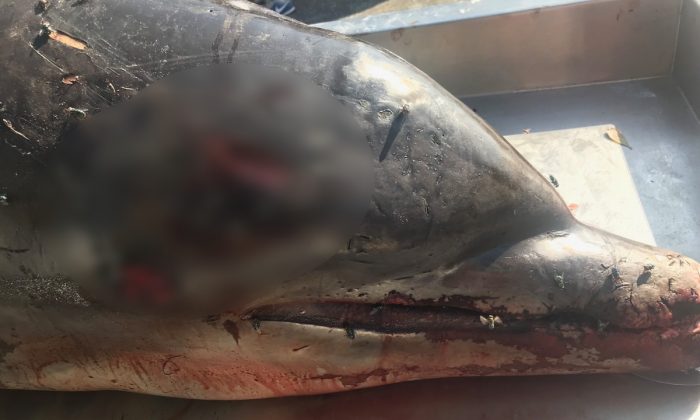 A dolphin with a head wound was found in Florida at the end of May 2019. (Florida Fish and Wildlife Conservation Commission)
US News

Authorities have offered a cash reward of $38,000 for information leading to the arrest of the person responsible for spearing a “begging dolphin” on North Captiva Island in Lee County, Florida.

The Florida Fish and Wildlife Conservation Commission (NOAA) received a report about a bottlenose dolphin found dead at the end of May 2019, said a news release by NOAA.

“A necropsy, or non-human autopsy, revealed the dolphin was impaled in the head with a spear-like object while alive,” said NOAA.

The spear attack had caused a wound that penetrated the dolphin near the right eye and extended almost 6 inches towards the top and back of the head.

“The wound ended inside the head at the top of the skull and had evidence of hemorrhaging, indicating wounds consistent with being impaled prior to death,” said the release.

The release said the dolphin was an adult male and was known to biologists in the local area. It was last monitored around fishing boats and was seen swimming with “begging dolphins.”

A post in NOAA’s species directory says bottlenose dolphins associate humans with an easy meal and change their hunting habits to begging for food, teaching these new habits to other dolphins and calves.

“Dolphins are then more vulnerable to vessel strikes and to fishing gear entanglements and ingestion. They also may fall victim to extreme retaliatory acts (such as shooting) by frustrated boaters and fishermen,” said NOAA in the species directory post.

The news release about the speared dolphin says it might have been begging when stabbed.

Anyone with information about the incident should call the NOAA Enforcement Hotline as soon as possible at 1-800-853-1964.

NOAA’s various partners in their combined efforts have raised $18,000 and NOAA’s Office of Law Enforcement had added another $20,000 for information leading to the identification, successful prosecution, arrest, and conviction of the culprit.

Last year NOAA offered a reward of $13,000 for information leading to arrests in case of a pregnant dolphin shot and killed in Waveland, Mississippi.

The dead dolphin was recovered on April 30, 2018, by the Institute for Marine Mammal Studies.

“It was during necropsy that the gunshot wound was discovered. A small-caliber bullet was found lodged in the dolphin’s lung and proved to be the cause of death,” NOAA said in a news release.

The mother dolphin died due to the gunshot and the unborn calf died because of the mother’s death.

NOAA says it has identified 61 bottlenose dolphins in the waters around the United States. They live close to shore and are more prone to human-related deaths and injuries.

Since 2002 at least 26 dolphins, including the one speared, have been “shot by guns or arrows, or impaled with objects.”

The authorities advise people not to feed or attempt to feed dolphins because it’s illegal.

“Harassing, harming, killing or feeding wild dolphins is prohibited under the Marine Mammal Protection Act of 1972. Violations can be prosecuted either civilly or criminally and are punishable by up to $100,000 in fines and up to one year in jail per violation,” said NOAA.

Association with humans can also lead to long term impact on dolphin populations including “compromised health, reduced reproductive success, and displacement from, or avoidance of, important habitats.”

NOAA says it works to protect and conserve bottlenose dolphins by keeping them away from commercial and recreational fishing gear, minimizing their harassment and illegal feeding, taking care of the dead, injured, or entangled ones and minimizing human interference with dolphin habitats.