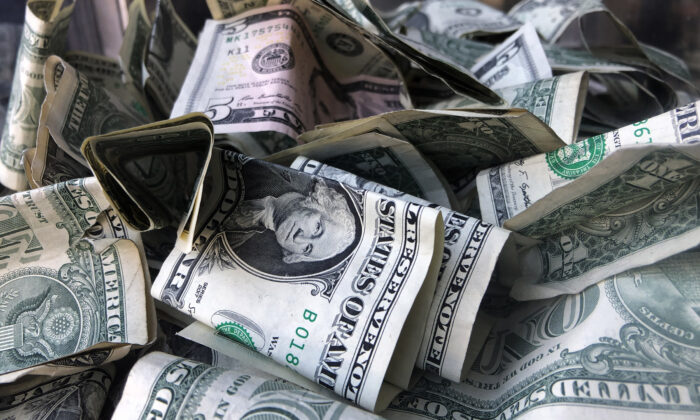 The U.S. dollar gained ground for three straight sessions assisted by robust U.S. job growth in March, expectations of faster rate hikes by the Fed, and the prospect of increased sanctions on Russia amid rising Ukrainian civilian casualties.

According to the Bureau of Labor Statistics’s nonfarm payrolls report, 431,000 jobs were added in March, below the estimated 490,000. Unemployment rate declined to 3.6 percent. Job numbers in February were revised to 750,000 from the initial 678,000.

Inflation has been rising the fastest since the 1980s and Federal Reserve policymakers have begun to take a hawkish stance in curbing price hikes. Recent talks have led the market to expect higher and more frequent rate hikes. The strong payroll numbers indicate a possibility for markets to expect a half percentage point tightening at next month’s Fed meeting.

“Another strong print is sustaining expectations for two or more jumbo-sized Fed hikes in the coming months and has added to momentum driving the dollar higher,” said Karl Schamotta, chief market strategist at Corpay, according to Reuters.

European leaders like French President Emmanuel Macron have called for renewed sanctions against Russia for committing alleged war crimes in Ukraine in the killing of around 300 civilians in the town of Bucha. The Kremlin has denied the allegations.

“We can’t help but see these images as a punch in the gut,” said U.S. Secretary of State Antony Blinken in a CNN interview on Sunday. “There needs to be accountability.”

“But I think the most important thing is we can’t become numb to this. We can’t normalize this. This is the reality of what’s going on every single day as long as Russia’s brutality against Ukraine continues.”

Without providing specifics, Blinken said that the members of the NATO alliance are continuing to provide support for Ukraine forces including sending in anti-tank systems.

Talks are still ongoing regarding the dependence of European countries on Russian energy imports. Moscow supplies 40 percent of the continent’s gas requirements.

More sanctions could mean a counterpunch by Russia which has demanded gas to be paid in rubles. Increased tensions have assisted the flow of investments from the continent toward the U.S. dollar.