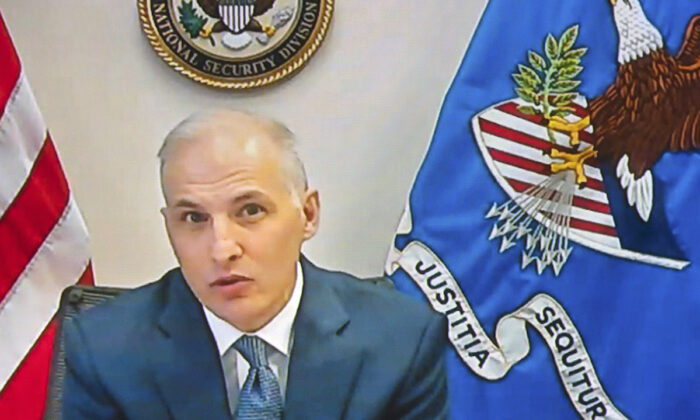 The Department of Justice (DOJ) announced on Feb. 23 that it’s ending the “China Initiative,” an effort to combat economic espionage, trade theft, and technology transfer by the Chinese regime.

The program will be replaced with a broader approach focused on countering espionage, cyberattacks, and other threats from a range of countries, a top DOJ official said. The announcement followed a departmental review into the initiative’s practices following mounting allegations of racism and mishandling.

“The review’s purpose was forward-looking,” Assistant Attorney General Matthew Olsen said during a press briefing. “The key question was whether this framework still best serves the strategic needs and priorities of the department.

“While I remain focused on the evolving, significant threat that the government of China poses, I have concluded that this initiative is not the right approach.”

The initiative was launched by the Trump administration in 2018. Its purpose was to broadly counter national security threats stemming from the Chinese Communist Party’s (CCP) use of espionage, fraud, and cybercrime against the United States.

Olsen said the nation’s ongoing competition with China’s ruling communist regime demands a broader approach that wouldn’t antagonize ethnic Chinese in the United States. Making that distinction between the CCP and Chinese people he said, is of paramount importance.

“To be clear, we are focused on the actions of the PRC [People’s Republic of China] government, the Chinese Communist Party, and their agents—not the Chinese people or those of Chinese descent,” Olsen said.

“As we talk about the threats that the PRC government poses to the United States, we must never lose sight of that fundamental distinction. We must always be vigilant to ensure that no one is treated differently based on race, ethnicity, familial ties, or national origin. This is a foundational commitment of the Department of Justice.”

The remarks follow petitions by several rights groups to end the program, as well as the results of a survey that found that the initiative had severely frightened ethnic Chinese working in American universities.

The survey, conducted by the University of Arizona and the Committee of 100, a nonprofit group focused on improving Sino–American relations, found that over 42 percent of scientists of Chinese heritage felt racially profiled by the U.S. government.

The results showed that 42 percent of Chinese scientists also said that they were now considering ending their time in the United States because of the initiative.

Olsen said that the CCP had engaged in espionage against the United States, targeted U.S. citizens whom it knew had access to military secrets, and utilized malicious cyber campaigns against the nation, including against those working in critical research and emerging technologies.

He also condemned the regime’s attempts to silence dissent globally, including through its illegal international campaign to harass and intimidate ethnic Chinese, called Operation Fox Hunt.

Ultimately, Olsen concluded that the China Initiative was “driven by genuine national security concerns” but that its methods had raised legitimate concerns that the DOJ had “fueled a narrative of intolerance and bias.”

He said the initiative was designed as a coherent approach to tackling a complex array of challenges posed by the CCP, but that the blowback it created, and the risk it posed to academic research and economic development in the long term, was too great for it to be maintained.

In all, Olsen said that the DOJ would remain committed to prioritizing national security threats from the Chinese regime and other hostile nations, but that it would pursue a strategy focused on nation-state actors.

“Make no mistake, we will be relentless in defending our country from China,” Olsen said.

“But our review convinced us that a new approach is needed to tackle the most severe threats from a range of hostile nation-states.”

Olsen said that the department will focus on threats from the CCP in a manner that’s more in line with the Constitutional protections afforded to all Americans.

“The United States is a beacon for people all over the world who seek to live in an open and democratic society,” Olsen said. “It is our duty in the National Security Division to protect the United States from the myriad threats we face, while staying true to the Constitution and the values of the Justice Department.”