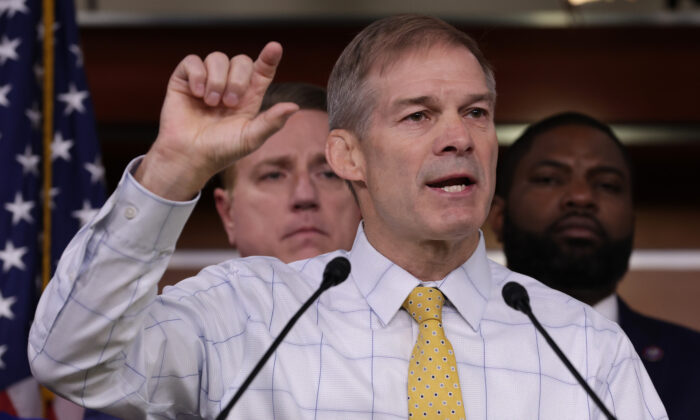 Rep. Jim Jordan (R-Ohio) speaks during a news conference at the U.S. Capitol in Washington on Nov. 17, 2022. (Alex Wong/Getty Images)
By Ingólfur Stefánsson

The Department of Justice (DOJ) has informed House Judiciary Committee Chairman Rep. Jim Jordan (R-Ohio) that information about ongoing investigations will not be shared, in a letter on Jan. 20. The DOJ stated that “any oversight request must be weighed against the department’s interests in protecting the integrity of its work.”

Assistant Attorney General for the Office of Legislative Affairs Carlos Felipe Uriarte writes in the DOJ’s letter that according to department policy, certain details about ongoing investigations must be withheld, but claimed that the department was prepared to negotiate in “good faith” with Congress.

“With respect to oversight requests for information and documents, we share your belief that congressional oversight is vital to our functioning democracy and we are committed to cooperating with the committee’s legitimate efforts to seek information, consistent with our obligation to protect executive branch confidentiality interests,” Uriarte writes.

Furthermore, Uriarte claims that longstanding department policy prevents it from confirming or denying the existence of pending investigations, outlining department practices and its mission.

“The department’s obligation to ‘protect the government’s ability to prosecute fully and fairly’ is vital to the executive branch’s core constitutional function to investigate and prosecute criminal matters. The department’s mission to independently and impartially uphold the rule of law requires us to maintain the integrity of our investigations, prosecutions, and civil actions, and to avoid even a perception that our efforts are influenced by anything but the law and the facts. So does the department’s obligation to protect witnesses and law enforcement, avoid flight by those implicated in our investigations, and prevent additional crimes and attacks.”

Jordan resent several requests for outstanding documents and information to Biden administration officials on Jan. 17 with a warning.

“Since the beginning of the Biden Administration, we have made several requests for information and documents concerning the operations and actions of the Federal Bureau of Investigation. These requests remain outstanding. As we begin the 118th Congress, we write again to reiterate our outstanding requests and ask that you immediately comply in full,” Jordan wrote in his letter (pdf) addressed to FBI Director Christopher Wray.

Jordan noted that his Jan. 17 request would be the last time that the committee would request the information and added that “the committee is prepared to resort to compulsory process, if necessary, to obtain this material.”

Uriarte claims that the DOJ and its components have worked in good faith to respond to Jordan’s requests. He said he believes that a solution can be reached through negotiations in which both parties can be satisfied without any threat to the DOJ’s institutional interests.

“Your January 17 requests—made now in your position as chairman—initiate the constitutionally mandated accommodation process. Under this process, the legislative and executive branches have a constitutional obligation to negotiate in good faith to meet the informational needs of Congress while protecting the institutional interests of the Executive Branch,” Uriarte wrote.

“We look forward to beginning this process in response to your January 17 letters. We believe that good-faith negotiations will enable us to meet the committee’s needs while protecting the department’s institutional interests. We are available to engage in staff-level meetings to determine which information requests incorporated into your recent letters reflect the committee’s current priorities in light of prior department responses and disclosures.”