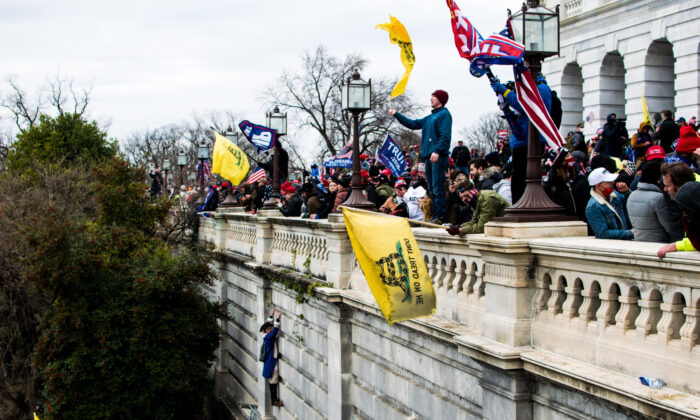 Protesters stand on the veranda of the U.S. Capitol at a rally in Washington on Jan. 6, 2021. (Courtesy of Brandon Drey)
By Jack Phillips

The Department of Justice (DOJ) seized $90,000 from a Utah man who sold footage of Ashli Babbitt being shot during the Jan. 6 Capitol breach, according to court filings filed by federal prosecutors.

So far, more than 400 people have been charged in connection to the breach, which occurred as members of Congress were voting to certify the 2020 presidential election.

According to the court documents, Sullivan portrayed himself as an independent journalist who was reporting on the chaos, but he actually encouraged other participants to “burn” the building and engage in violence.

Sullivan is accused of having a conversation with others who breached the building and allegedly told them: “We gotta get this [expletive] burned,” according to court documents in his case.

At one point, he’s also heard saying, “I am ready bro. I’ve been to too many riots. I’ve been in so many riots,” the documents said. “It would be fire if someone had revolutionary music and [expletive],” prosecutors said Sullivan told others on Jan. 6.

Prosecutors furthermore alleged that Sullivan apparently broke a window inside and said, “I broke it. My bad, my apologies. Well, they already broke a window, so, you know, I didn’t know I hit it that hard. No one got that on camera.”

After leaving the Capitol later on Jan. 6, Sullivan was seen, according to prosecutors, telling another individual that he “brought my megaphone to instigate [expletives]” and wanted to “make these Trump supporters [expletive] all this [expletive] up.”

Sullivan recorded a video of the confrontation between rioters and police near the House chamber that included the shooting of Air Force veteran Babbitt and, according to court filings, bragged to a witness that “my footage is worth like a million of dollars, millions of dollars.”

Sullivan sold that footage to several news outlets for a total of $90,000, according to a seizure warrant. The news outlets were redacted from the warrant.

After the breach in January, Sullivan appeared on several corporate media outlets including CNN and MSNBC.

During his CNN appearance in January, Sullivan said that he was “not on the Trump side” or the “MAGA side” and alleged he was just there to document the incident.

Sullivan in July 2020 was arrested in Utah for alleged rioting, making a threat of violence, and criminal mischief because he engaged in a riot that resulted in the shooting of a motorist amid nationwide Black Lives Matter demonstrations last year. He was named as an organizer in a police affidavit.

“As a protest organizer, John Sullivan is heard talking about seeing the shooting, looking at the gun, and seeing smoke coming from it. John did not condemn the attempted murder nor attempt to stop it nor aide in its investigation by police,” the police affidavit said, according to the Utah-based Deseret News.

Later, on Dec. 28, Sullivan also wrote on Twitter that he supported an “armed revolution,” saying that it “is the only way to bring about change effectively.” His account was later suspended.

Using the nickname “Jayden X” online, Sullivan tweeted just days before the Capitol breach that the system should be burned to the ground while adding anti-capitalist, anti-Trump, and Black Lives Matter hashtags.

And on Jan. 2, just days before the breach, Sullivan’s account wrote: “[Expletive] The System – Time To Burn It All Down. #blm #antifa #burn #[expletive]thesystem #abolishcapitalism #abolishthepolice #acab #[expletive]trump.”

Sullivan’s lawyer had no comment on the case when he was contacted on Sunday.

The man’s lawyer, Steven Kiersh, wrote in court documents that the government should not sieze his money, arguing, “The proceeds of the seized bank account are not the product of criminal activity alleged in the indictment” and that his client was being deprived of the money “in violation of the Due Process Clause of the United States Constitution.”