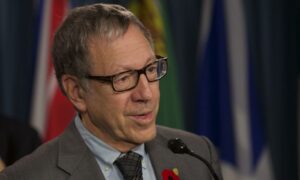 Attorney General William Barr on Nov. 20 directed the Federal Bureau of Prisons to schedule the executions of three federal death-row inmates, convicted for what the Department of Justice described as “staggeringly brutal murders.”

All three inmates—Alfred Bourgeois, Cory Johnson, and Dustin John Higgs—were sentenced years ago for a series of deadly crimes, with convictions and sentences for one affirmed on appeal dating back more than 24 years, but various legal impediments prevented authorities from proceeding with their executions until now, the Department of Justice (DOJ) said in a release.

In 2002, Bourgeois took his 2 1/2-year-old daughter along on a trucking route, where he abused, tortured, and ultimately beat her to death after she tipped over her training potty while he was making a delivery.

He was found guilty in 2004, with a jury unanimously recommending he be put to death. In 2019, authorities had set his execution for Jan. 13, but legal impediments prevented the sentence from being carried out at that time. He’s scheduled to be executed by lethal injection on Dec. 11, at the Federal Correctional Complex in Terre Haute, Indiana.

Johnson murdered seven people in connection with his drug-trafficking activities.

“In early 1992, Johnson went on a killing spree, shooting and killing each of the seven victims for perceived slights or rivalry in the drug trade,” the DOJ said, including shooting a victim at close range after ordering him to place his head on a car steering wheel, and shooting another victim to death in his home after he failed to pay for crack cocaine.

Johnson was found guilty in 1993 of a variety of capital offenses, including seven counts of murder, with a jury unanimously recommending a death sentence, which was affirmed 24 years ago. He was originally scheduled for execution in 2006, but a preliminary injunction prevented authorities from proceeding with carrying out the sentence until this September. Johnson is set to be executed by lethal injection on Jan. 14, 2021.

In 1996, Higgs kidnapped and killed three women after he and two friends drove them to a secluded area at the Patuxent National Wildlife Refuge in Maryland, where the DOJ said Higgs “ordered the women out of the vehicle, gave a gun to one of his friends, and said, ‘better make sure they’re dead.'” All three women were shot to death.

Higgs was found guilty of a range of offenses, including three counts of first-degree murder, with a jury unanimously recommending nine death sentences, which were affirmed after an appeal 17 years ago. His execution is scheduled for Jan. 15, 2021.