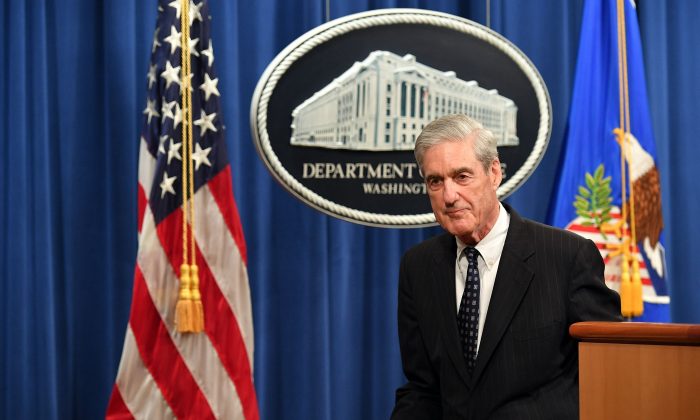 Then-Special Counsel Robert Mueller leaves after speaking on the investigation into Russian interference in the 2016 Presidential election, at the US Justice Department in Washington, DC, on May 29, 2019. (Photo by MANDEL NGAN / AFP) (Photo credit should read MANDEL NGAN/AFP/Getty Images)
Trump Administration

The Justice Department sent a letter to former special counsel Robert Mueller on July 22, advising that his testimony scheduled for Congress on July 24, “must remain within the boundaries” of the public version of his Russia investigation report.

The letter was in response to a letter Mueller submitted to the Justice Department on July 10 requesting “guidance concerning privilege or other legal bars applicable to potential testimony.”

Mueller, who oversaw the federal investigation into alleged Russian interference in the 2016 U.S. presidential election, is scheduled to testify on July 24 before House Judiciary and Intelligence committees.

Mueller submitted his final report on the Russia investigation to Attorney General William Barr on March 22, and the Justice Department publicly released the report on April 18. Mueller then delivered a public statement on the report on May 29 in which he said, “So beyond what I’ve said here today and what is contained in our written work, I do not believe it is appropriate for me to speak further about the investigation or to comment on the actions of the Justice Department or Congress.”

However, House Judiciary Chairman Jerry Nadler (D-N.Y.) and House Intelligence Chairman Adam Schiff (D-Calif.) on June 25 compelled Mueller through a subpoena (pdf) to appear before Congress to testify again on the findings of his report.

Associate Deputy Attorney General Bradley Weinsheimer added in the DOJ letter that Mueller’s upcoming testimony on July 24 must “remain within the boundaries of your public report because matters within the scope of your investigation were covered by executive privilege,” as Mueller had said was appropriate.

The letter also cited more of Mueller’s May 29 statement where he said that any further testimony from him wouldn’t reveal any new information.

“Any testimony from this office would not go beyond our report. It contains findings and analysis, and the reasons for the decisions we made. We chose those words carefully and the work speaks for itself. I would not provide information beyond that which is already public in any appearance before Congress,” Mueller had said at the time.

Weinsheimer noted that the DOJ agreed with Mueller’s statement that his testimony was unnecessary and that the department didn’t generally permit “prosecutors such as you to appear and testify before Congress regarding their investigative and prosecutorial activity.”

The letter also reminded Mueller that “there should be no testimony concerning the redacted portions of the public version of our report, which may not be disclosed because of applicable laws, court rules and orders … or longstanding Department policies.”

According to the public version of Mueller’s report, he found no evidence that either Trump or any U.S. citizen knowingly conspired or coordinated with the Russian government ahead of the 2016 election.

The Justice Department is currently investigating the origins of the FBI probe into the Trump campaign as well as the FBI’s use of Foreign Intelligence Surveillance Act (FISA) warrants to spy on Trump campaign associate Carter Page.

Trump has said that Mueller shouldn’t testify and warned that “in the end, it will be bad for him.”

In a July 22 tweet, Trump wrote: “Highly conflicted Robert Mueller should not be given another bite at the apple. In the end, it will be bad for him and the phony Democrats in Congress who have done nothing but waste time on this ridiculous Witch Hunt. Result of the Mueller Report, NO COLLUSION, NO OBSTRUCTION!…”

Highly conflicted Robert Mueller should not be given another bite at the apple. In the end it will be bad for him and the phony Democrats in Congress who have done nothing but waste time on this ridiculous Witch Hunt. Result of the Mueller Report, NO COLLUSION, NO OBSTRUCTION!…

During Mueller’s May 29 statement, he noted that his team had charged several groups of Russians with interfering in the 2016 presidential election.

He used different wording when describing the findings of no conspiracy or cooperation between Russian actors and the Trump campaign. In his report, Mueller said the investigation “did not establish” such collusion. However, on May 29, he changed his wording to say that “there was insufficient evidence to charge a broader conspiracy.” It isn’t clear why his wording changed.

For Mueller’s July 24 testimony, Democrats are expected to focus on five areas of the report related to obstruction of justice, rather than on whether the Trump campaign colluded with Russia, Fox News reported.