"This unconstitutional practice costs Louisiana over $2.5 million a year" 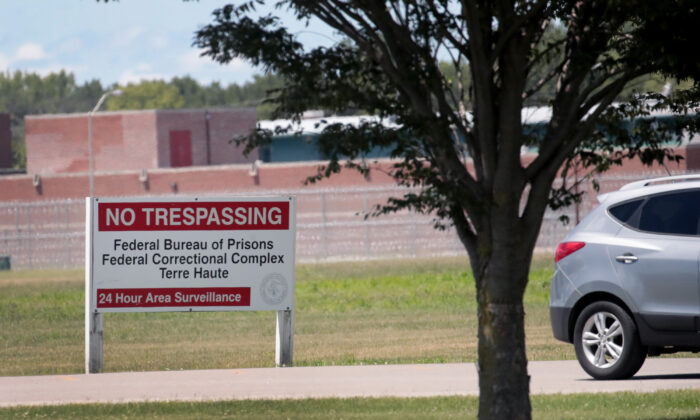 A sign sits at the entrance of the Federal Correctional Complex in Terre Haute, Ind., on July 13, 2020. (Scott Olson/Getty Images)
By Katabella Roberts

There is “reasonable cause” to believe that the Louisiana Department of Public Safety and Corrections (LDOC) routinely holds inmates in prison beyond their legal release date, in violation of their rights, according to the Department of Justice.

In a press release on Jan. 25, the DOJ said that an investigation into the state’s prison system had found that since at least 2012, more than a quarter of the people that were supposed to be released from LDOC’s custody every year had instead been held past their release date.

This, they said, is in violation of the due process protections in the Constitution.

Specifically, the DOJ probe found that Louisiana’s prison system denies individuals’ due process rights to timely release from prison by holding them for weeks or months past their release date, and that it has thus far failed to implement adequate policies and procedures that causes systemic over-detentions of inmates.

The DOJ said that when it comes to the “systemic over detention” of people in its custody, LDOC is “deliberately indifferent.”

The department said that the state’s prison system has been on notice for more than 10 years regarding its over-detention issue. But despite this, it has allegedly failed to take adequate measures to ensure that incarcerated individuals are released from prisons on time.

Pointing to its 27-page investigation report (pdf), the DOJ said that between January and April 2022, 1,108 of the 4,135 people released from LDOC’s custody were held past their release dates; which is approximately 26.8 percent.

“In just this four-month period, LDOC had to pay parish jails an estimated $850,000, at a minimum, in fees for the days those individuals were incarcerated beyond their lawful sentences,” the report said. “At that rate, this unconstitutional practice costs Louisiana over $2.5 million a year.”

According to the department, the agency’s failure to release inmates in a timely manner is a violation of those individuals’ fourteenth amendment, which guarantees equal protection under the laws to all citizens.

In its report, the DOJ provided LDOC with “the minimum remedial measures necessary to address the identified deficiencies,” which included a recommendation that the corrections department develop a system to electronically share documents and information with courts, parish jails, and prison officials to provide better clarity regarding inmate’s scheduled release dates and any changes to that date, including earlier release eligibility.

The state has 49 days to “correct deficiencies” identified in the report by the DOJ, after which the department may file a lawsuit if it finds that state officials have not “satisfactorily” addressed its concerns.

“The Constitution guarantees that people incarcerated in jails and prisons may not be detained beyond their release dates, and it is the fundamental duty of the State to ensure that all people in its custody are released on time,” said Assistant Attorney General Kristen Clarke of the Justice Department’s Civil Rights Division in a statement.

“Our investigation uncovered evidence of systemic violations by the Louisiana Department of Public Safety and Corrections that have resulted in the routine confinement of people far beyond the dates when they are legally entitled to be released,” Clarke continued, adding that DOJ is ready to work with state officials to institute “long overdue reforms.”

Attorney Brandon B. Brown for the Western District of Louisiana added that there is an “obligation both to incarcerated persons and the taxpayers not to keep someone incarcerated for longer than they should be.”

“ This can be costly from a physical and mental standpoint for the incarcerated individual and a waste of money for the taxpayer,” Brown said.

The Louisiana Department of Public Safety and Corrections said in an emailed statement to The Epoch Times that it is reviewing the DOJ report.

“Without a full review of the report’s findings and documentation supporting said findings, it would be a challenge to provide a comprehensive response at this time,” the statement said. “The Department of Corrections has been cooperative for the entire duration of the investigation, and we will continue to work with DOJ throughout this process.”

A number of former inmates and civil rights lawyers have filed lawsuits against Louisiana’s prison system over its alleged failure to release inmates on time, some of which have been settled for over $100,000, including one by Shreveport resident Kenneth Owen who was sentenced to 21 years for attempted manslaughter in 1989.