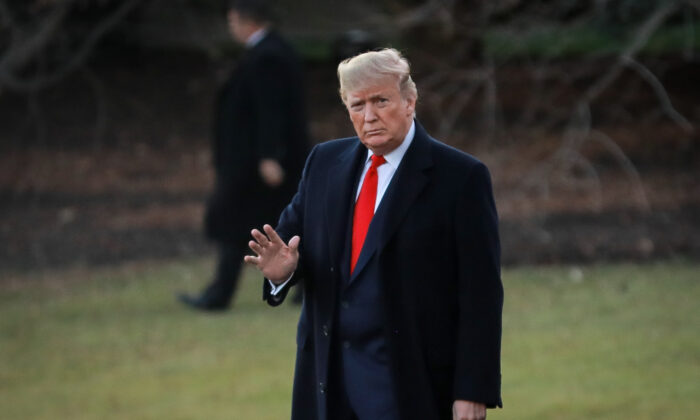 President Donald Trump walks to Marine One en route to Ohio for a rally, at the White House in Washington on Jan. 9, 2020. (Charlotte Cuthbertson/The Epoch Times)
By Janita Kan

The Justice Department has filed briefs, arguing to the Supreme Court that the House of Representatives and a New York investigation’s subpoenas seeking to gain access to President Donald Trump’s financial records are unconstitutional.

Solicitor General Noel Francisco argued in the two separate friend-of-the-court briefs filed on Monday that the Constitution and the separation of powers protect presidents from any process that could risk “impairing the independence of his office or interfering with the performance of its functions.”

He argues that when the House committees and the Manhattan District Attorney’s Office sought to gain access to Trump’s financial records, their actions had posed a “serious risk” of harassing the president, distracting him from his constitutional duties.

The cases at hand reached the Supreme Court after appellate judges upheld three cases appealing lower court decisions that require Trump’s accounting firm Mazars USA and two banks to comply with the subpoenas issued by the House and a New York district attorney in a grand jury probe. Two of the cases stem from subpoenas that were issued earlier in the year by three House committees—Financial Services, Intelligence, and Oversight—as part of their probes into allegations of the president’s dealings. Meanwhile, the third case deals with a criminal investigation in Manhattan.

In the House-related cases, Francisco argues that the committees have not shown a legitimate legislative purpose for the information they are seeking.

“Article II provides an immunity from any process that would risk impairing the independence of his office or interfering with the performance of its functions,” he wrote (pdf). “That risk is particularly palpable when the President’s political adversaries control one or both chambers of Congress. For that reason, the Framers deliberately sought to insulate the President from congressional interference in particular.”

Francisco adds that as a threshold, the full House should “unequivocally authorize a subpoena against the President.” He adds the purpose should be set out with specificity and that the House must demonstrate that the information sought is critical to the legislative purpose.

He said the House fails to meet the “heightened requirements” for seeking information from the president.

“The four reasons offered in support of the Mazars subpoena betray an impermissible law enforcement objective, and the boilerplate statement that the subpoena furthers ‘multiple laws and legislative proposals’ is far too vague to enable, much less withstand, meaningful scrutiny of its legitimacy,” he wrote.

“Likewise, the Deutsche Bank and Capital One subpoenas seek information that is not demonstrably critical to any legitimate legislative purpose. One committee’s investigation was into closing loopholes in money laundering laws, the other’s into foreign interference in elections. That two committees issued carbon-copy subpoenas for markedly divergent purposes strongly suggests that neither is the true purpose. Moreover, the resolution on which the committees rely does not even mention foreign interference in elections, and there is no reason why investigating potential changes to money laundering laws should focus on the President in particular,” he said.

Francisco made similar arguments in his filing in the New York grand jury case. In that case, District Attorney of New York County Cyrus Vance Jr. issued a subpoena to Mazars requesting Trump’s financial records in connection with a criminal case. Vance is investigating hush money allegedly paid to two women during the 2016 presidential campaign—adult film star Stormy Daniels and former Playboy model Karen McDougal. Trump has denied the affairs and any other wrongdoing. Trump sued Vance in September in an attempt to block the subpoena. The district court denied Trump’s application for an injunction over the subpoena and dismissed the case in October, prompting the president’s lawyers to file an appeal.

The department argues that state prosecutors should not be allowed to issue such subpoenas because they could be used to “harass the President in retaliation for the President’s official policies.”

“Such subpoenas could also subject the President to significant burdens, threatening to divert the President’s time and energy from his singularly important public duties,” Francisco wrote (pdf).

He argues that local prosecutors have “strong incentives to respond to the interests of their own communities” rather than to consider the effects of the subpoenas on the nation as a whole.