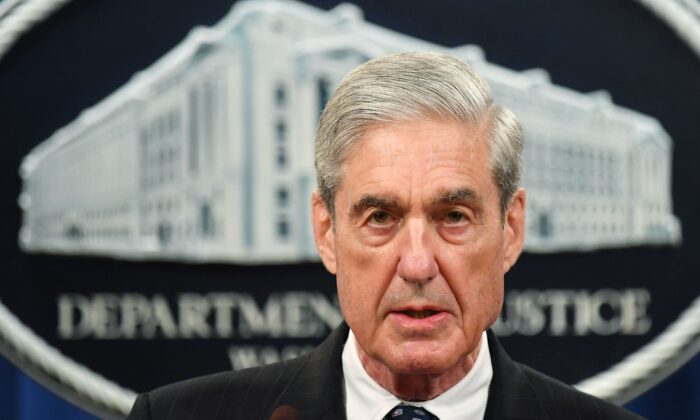 Then-Special counsel Robert Mueller speaks on the investigation into Russian interference in the 2016 presidential election at the U.S. Justice Department in Washington on May 29, 2019. (Mandel Ngan/AFP via Getty Images)
Judiciary

DOJ Reviewing ‘Alternative’ Mueller Report Ahead of Its Possible Release

The Department of Justice (DOJ) is reviewing a so-called alternative Mueller Report mentioned in a book by Andrew Weissmann, one of former special counsel Robert Mueller’s top prosecutors, with court filings indicating that the document has been found, it’s now being processed, and there are plans for it to be released.

A Dec. 2 filing (pdf), first reported by Politico, shows attorneys from the Manhattan U.S. Attorney’s Office telling District Judge Katherine Polk Failla that officials have “located and begun processing” the document that Weissmann was referring to in his book, “Where Law Ends: Inside the Mueller Investigation.”

Assistant U.S. Attorney Jennifer Jude wrote in the filing that the primary processing of the document would wrap up by the end of January 2022 and that the Justice Department intended to release “all non-exempt portions” of the report to The New York Times, which filed a FOIA request to obtain it and later sued the DOJ to prompt its release.

Weissman, who worked on Mueller’s probe into alleged Russian interference in the 2016 election and expressed dissatisfaction with the final version of the special counsel’s report, wrote in his book that he had all members of Mueller’s team “write up an internal report memorializing everything we found, our conclusions, and the limitations on the investigation, and provided it to the other team leaders as well as had it maintained in our files.”

Mueller’s report states that there is insufficient evidence to establish a conspiracy between members of the Trump campaign and the Russian government to sway the 2016 election. Then-Attorney General William Barr said in a letter characterizing Mueller’s findings that the special counsel found “no collusion” between the Trump team and Russia, while former President Donald Trump described the probe as a “witch hunt” and a “hoax.”

While it’s unclear what new insights the alternative report might provide, The New York Times said in its lawsuit (pdf) that the document is of “immense public interest” as it “may provide a more complete explanation of the scope” of Mueller’s report and that the existence of an alternative version “suggests that there was important facts or findings omitted from the original.”

The Manhattan U.S. Attorney’s Office said in the filing that after the primary processing of the alternative version is complete, it would be sent to other departments within the DOJ for consultation.