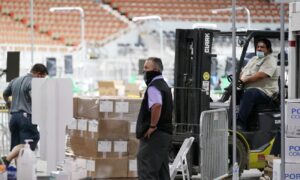 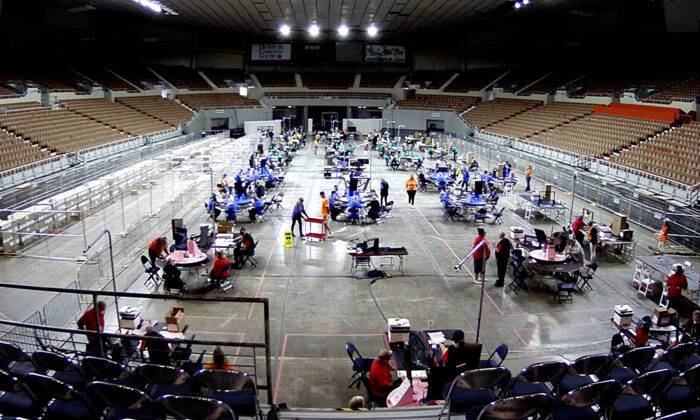 The U.S. Department of Justice on May 5 raised concerns about the security of ballots and the potential for voter intimidation related to the ongoing 2020 election audit in Maricopa County, Arizona.

Pamela Karlan, principal deputy assistant attorney general with the DOJ’s Civil Rights Division, cited news reports to inquire, in a letter (pdf) to Arizona Senate President Karen Fann, about the custody of the ballots currently under review by a group of private contractors. Karlan also complained that a portion of the audit work that involves canvassing addresses on the ballots may amount to “voter intimidation.”

“The first issue relates to a number of reports suggesting that the ballots, elections systems, and election materials that are the subject of the Maricopa County audit are no longer under the ultimate control of state and local elections officials, are not being adequately safeguarded by contractors at an insecure facility, and are at risk of being lost, stolen, altered, compromised, or destroyed,” Karlan wrote, citing a pair of news articles as the source for her assertions.

One of the articles Karlan cited claims that there were security lapses in the audit process. The only evidence the article offered were the opinions of a local Democrat politician and a security expert, both of whom formed their conclusions based on a video prepared by a local news channel. The second and third articles cited by Karlan were published in January and February, before the venue and the contractors for the audit were selected.

Karlan also raised concerns about a plan by one of the audit contractors, Cyber Ninjas, to verify the validity of certain voter registrations with questionable addresses by dispatching people to verify whether the voter lived at the address on the registrations.

“Past experience with similar investigative efforts around the country has raised concerns that they can be directed at minority voters, which potentially can implicate the anti-intimidation prohibitions of the Voting Rights Act.

“Such investigative efforts can have a significant intimidating effect on qualified voters that can deter them from seeking to vote in the future.”

Fann’s office didn’t respond to a request by The Epoch Times for comment.

Arizona Secretary of State Katie Hobbs, a Democrat who opposes the audit, wrote on Twitter that she’s “glad to finally see an enforcement agency ready to protect Arizona voters.”

“On the heels of my letter highlighting security shortfalls at the ‘audit’ and potential for voter intimidation, DOJ is raising those same concerns, including that ballots aren’t properly safeguarded,” Hobbs said.

Arizona state Sen. Wendy Rogers, a Republican, issued on Twitter late on May 5 what appeared to be a warning in response to the DOJ letter.

“‘Justice’ Department – you need to stay in your lane. Do not touch Arizona ballots or machines unless you want to spend time in an Arizona prison,” she wrote.

The Brennan Center for Justice think tank and two other groups asked the DOJ last week to send monitors to observe the audit, relaying concerns that auditors were violating federal law.

“Specifically, we believe that the senate and its agents, including Cyber Ninjas, are 1) violating their duty under federal law to retain and preserve ballots cast in a federal election, which are and have been in danger of being stolen, defaced, or irretrievably damaged, and 2) preparing to engage in conduct which will constitute unlawful voter intimidation in violation of the Voting Rights Act and other federal laws,” Wendy Weiser, Elizabeth Howard, and Hannah Klain from the center at the New York University School of Law said.

But former Arizona Secretary of State Ken Bennett, a Republican tapped by Fann as the audit’s liaison, told The Epoch Times that the letter’s fundamental assertions were “completely unfounded.”

“We will be sending a rebuttal letter I guess for lack of a better word to the same people they sent it to. We welcome DOJ or anyone else to come see what’s really happening, because the ballots are secure, and there’s no risks or any of the things that claim there are,” he said.

The audit is taking place at the Arizona Veterans Memorial Coliseum in Phoenix.

Mimi Nguyen Ly and Zachary Stieber contributed to this report.