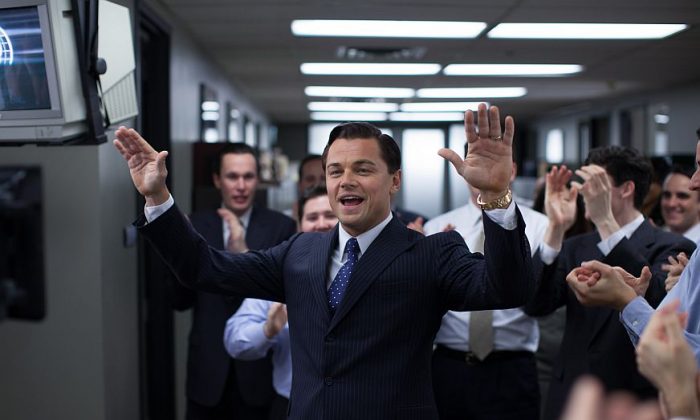 Leonardo DiCaprio as Jordan Belfort in "The Wolf of Wall Street" from Paramount Pictures and Red Granite Pictures. The film is nominated for five Oscars, including best picture, but came very close to never getting made. (AP Photo/Paramount Pictures, Mary Cybulski)
US

The Department of Justice says “life imitated art” when more than $3.5 billion was diverted from a Malaysian development fund and partly used to finance the movie “The Wolf of Wall Street” in a money-laundering scheme.

The DOJ said on July 20 that the money, which belonged to 1Malaysia Development Berhad (1MDB), was allegedly stolen by high-level officials of 1MDB and their associates. The fund was launched by the Malaysian government to promote economic development in the country and was supposed to be used to improve the wellbeing of the Malaysian people.

The Justice Department has taken action in an attempt to forfeit more than $1 billion of the misappropriated money, the amount it said was laundered through the United States.

“The Department of Justice will not allow the American financial system to be used as a conduit for corruption,” said Attorney General Loretta Lynch in a statement.

“With this action, we are seeking to forfeit and recover funds that were intended to grow the Malaysian economy and support the Malaysian people.  Instead, they were stolen, laundered through American financial institutions and used to enrich a few officials and their associates, ” she added.

The stolen money was laundered through a “series of complex transactions and fraudulent shell companies” with bank accounts in Singapore, Switzerland, Luxembourg and the United States, the Justice Department says.

The complaint says the misappropriated money that was laundered in the United States was used by co-conspirators to acquire and invest in various assets. Those assets include “high-end real estate and hotel properties in New York and Los Angeles, a $35 million jet aircraft, works of art by Vincent Van Gogh and Claude Monet, an interest in the music publishing rights of EMI Music and the production of the 2013 film The Wolf of Wall Street.”

“According to the allegations in the complaints, this is a case where life imitated art,” said Assistant Attorney General Leslie Caldwell in a statement.

“The associates of these corrupt 1MDB officials are alleged to have used some of the illicit proceeds of their fraud scheme to fund the production of The Wolf of Wall Street, a movie about a corrupt stockbroker who tried to hide his own illicit profits in a perceived foreign safe haven,” he added.

1MDB responded to the Justice Department’s move saying it was not a party to the civil suit, it does not have any assets in the United States, and it has not benefited from the various transactions described in the filing.

“1MDB will fully cooperate with any foreign lawful authority, subject to international protocols governing such matters and the advice of the relevant domestic lawful authorities,” 1MDB said in a statement.