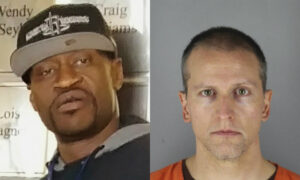 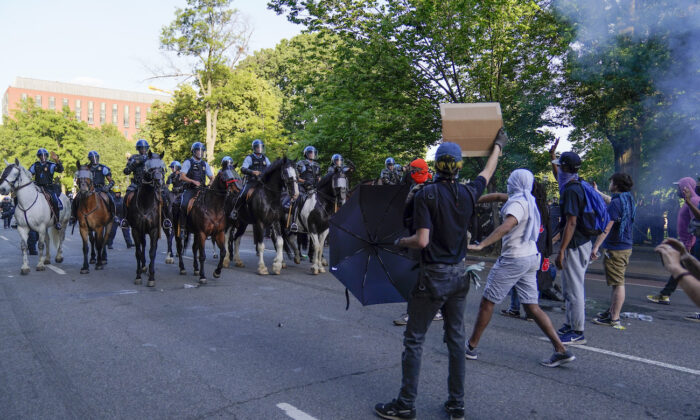 Police on horseback begin to approach demonstrators who gathered to protest the death of George Floyd, near the White House on June 1, 2020. (Evan Vucci/AP Photo)
US News

The Justice Department’s (DOJ) efforts to restore law and order amid the riots and chaos that have occurred since George Floyd’s death have led to the arrest of dozens of individuals over the past two weeks.

At least 81 individuals have been charged with federal crimes as of June 12, according to a DOJ document, obtained by The Epoch Times, that outlines details of the arrests made since late May when the nationwide protests began.

Among those charges, about 40 were arrested for committing acts of violence including using Molotov cocktails, setting fires, damaging property, and looting.

While many protests remained peaceful as people flooded the streets to call for change over police brutality and policing practices, some cities were faced with the violent activity that has led to significant property damage and more than a dozen deaths.

Senior officials have attributed the violent activity observed amid protests over Floyd, a black man who died in the custody of Minneapolis police, to extremist organizations such as Antifa. Attorney General William Barr said in a press conference on June 3 that Antifa and other similar groups and “actors of a variety of different political persuasions” have been behind the recent violent activities in order to carry out their own separate agendas.

Barr said these actors were capitalizing on the protests to “engage in lawlessness, violent rioting, arson, looting of businesses and public property, assaults on law enforcement officers and innocent people, and even the murder of a federal agent.”

In Seattle, protesters have occupied and barricaded off part of the city, dubbed the Capitol Hill Autonomous Zone, after the police were driven out of the East Precinct building, which was the site of violent clashes. The occupation prompted President Donald Trump to call on state and city officials to “take back” the city.

On June 11, some officers from the precinct returned to the building, where they remained on June 12, according to a police spokeswoman, as officials finalize plans to reclaim the building. The officers were there to assess the building, which was vandalized and had signs hung up stating, “This space is now property of the Seattle people.”

Barr has vowed to restore law and order to American streets and communities, stating that “federal law enforcement efforts are focused on the violent instigators.”

“We will continue to investigate, make arrests, and prosecute where warranted,” he said in a speech on June 4.

The document released by the DOJ details the federal riot-related cases announced so far by U.S. attorneys across the country; as of June 12, there were 57 pending cases.

Individuals were arrested for a range of alleged conduct, which includes pointing laser beams at law enforcement aircraft, setting police vehicles on fire, possession of firearms during the protests, theft and looting, inciting riots, and for impersonating a federal officer.

One man, Loren Reed, 26, of Page, Arizona, was arrested June 2 for using the internet and telephone to make threats to burn a local courthouse. According to the complaint, Reed created a private Facebook chat aimed at convincing people to join a meet-up at the courthouse to participate in a riot. In that chat, Reed allegedly posted numerous messages related to burning government buildings such as the courthouse and local police department. Police had received a tip about Reed from a concerned citizen.

In another case, Branden Michael Wolfe, 23, from St Paul, Minnesota, was charged with aiding and abetting arson at the Minneapolis Police Department’s 3rd Precinct. Wolfe was arrested by police at a home improvement store after receiving a complaint that an individual “wearing body armor and a law enforcement duty belt and carrying a baton” was trying to enter the store, according to the complaint.

Wolfe was previously employed as a security guard at the store but was fired earlier that day. The complaint said at the time when police encountered him, Wolfe was wearing several items stolen from the 3rd Precinct, including the body armor, a police-issue duty belt with handcuffs, an earphone piece, baton, and knife. Police later recovered additional items belonging to the police department at Wolfe’s apartment, including “a riot helmet, 9mm pistol magazine, police radio, and police issue overdose kit,” the complaint stated.

Questions about whether the far-left extremist group Antifa are involved in the rioting have been raised in recent days, following no signs of Antifa in federal criminal complaints.

In an interview with Fox News, Barr explained that Antifa hasn’t yet been mentioned in criminal complaints related to the rioting because federal authorities are still conducting comprehensive investigations into certain individuals with ties to the extremist group.

Barr said the investigation will look into the sources of funding behind the extremist groups and also on the coordinated tactics used by these groups during the protests.

President Donald Trump has announced a four-point plan to address police brutality and racial inequity in the United States amid calls for change from protesters.

Trump said his administration has been working on many different elements to promote law, order, and safety, while he condemned the violence observed over the past two weeks.

He said his plan would encourage police departments to “meet the most current professional standards of force.”

Barr, who was there during the announcement, appeared supportive of Trump’s plan. He reiterated DOJ’s commitment to supporting the president’s reform efforts.

He said that he didn’t think it’s the time to be “tearing down our institutions” in order to enact change, saying that America has been “on a march” in the last 50 years to reform its institutions, which he acknowledged had been “explicitly discriminatory” up until the last 60 years.

“We have to be mature about this, and when we see problems, we have to redouble our efforts to reform our institutions and make sure they’re in sync with our values,” Barr said.