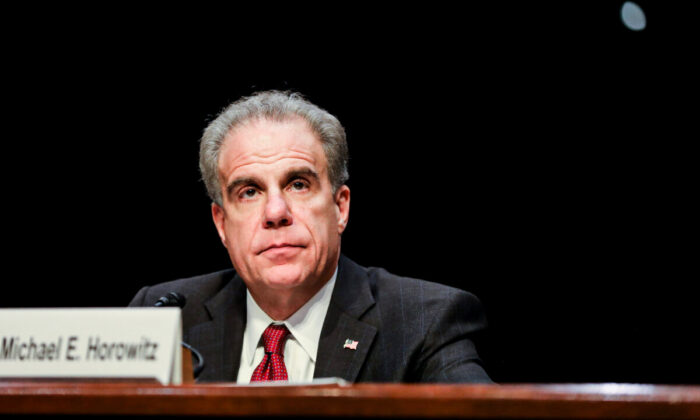 The Department of Justice (DOJ) must address deepening concerns that it’s not insulated from political influence, the agency’s watchdog stated in a new report.

The DOJ failed to follow policies and procedures designed to protect it from accusations that it’s politicized or partially applying the law in a number of cases, including while investigating Donald Trump’s campaign during the 2016 election and in leaks to the media, Inspector General Michael Horowitz noted.

“Numerous national events in the past year have crystalized the urgency for the department to address this challenge in a meaningful way,” he wrote, including the discovery that the DOJ under the Trump administration obtained communications to and from members of Congress and accusations that protesters were cleared from Lafayette Square in Washington on June 1, 2020, for political purposes.

Such events “have all raised questions about the department’s objectivity and impartiality” and “negatively impacted the perception of the department as a fair administrator of justice,” Horowitz said.

As proof, the watchdog cited a 2020 poll from the Pew Research Center, which found favorable views of DOJ among Democrats dropped sharply during the Trump administration. Republican views grew more favorable during the same time.

DOJ officials didn’t respond to requests by The Epoch Times for comment.

Critics on both the left and right have said the DOJ in recent years has acted wrongfully. Democrats repeatedly criticized the department during the Trump era, including over its bid to lower the jail sentence of Trump ally Roger Stone. Republicans also found problems with the agency, in particular over its handling of the probe into whether Trump’s campaign colluded with Russia that relied heavily on the now-discredited Steele dossier.

Sen. Chuck Grassley (R-Iowa), the ranking Republican on the Senate Judiciary Committee, told The Epoch Times that the DOJ “has had a cloud hanging over its credibility for years.”

“From the [Hillary] Clinton email investigation to the Russia probe and targeting parents exercising their First Amendment rights at school board meetings, there’s not been much to boost the public’s confidence that DOJ is apolitical. The inspector general’s assessment seems right on the money to me,” he wrote in an email.

“I hope the department, and its components like the FBI, begin turning a corner to regain some of their previous non-partisan, beyond-reproach reputations. The inspector general also said that he needs testimonial subpoena authority and the ability to independently investigate attorney misconduct. Those two things will go a long way toward ensuring bad apples at FBI and the department are truly held accountable.”