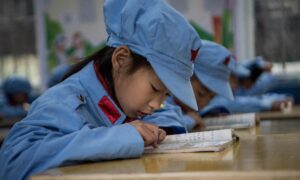 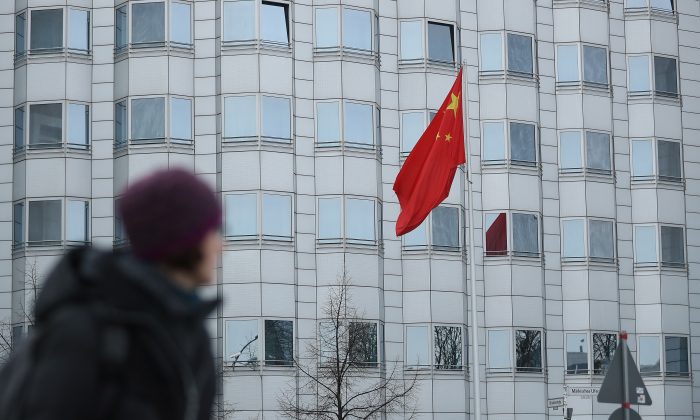 A woman walks past a Chinese Embassy in a file photo. (Sean Gallup/Getty Images)
US News

The FBI and Department of Justice (DOJ) on Wednesday said they have indicated eight Chinese Communist Party (CCP) operatives who allegedly engaged in a plot to intimidate or coerce dissidents around the world, including in the United States.

“The charges announced today are an unambiguous statement that the United States will not tolerate this type of flagrant conduct on our shores,” Demers said in a news release.

According to a DOJ and FBI complaint, the individuals harassed and surveilled a New Jersey resident who was not identified in the documents in a bid to force them back to China, according to FBI Director Christopher Wray in a news conference. Wray claimed the man was told by alleged CCP agents that he had to either kill himself or go back to China.

“The Chinese government’s brazen attempts to surveil, threaten, and harass our own citizens and lawful permanent residents while on American soil are part of China’s diverse campaign of theft and malign influence in our country and around the world,” Wray said.

Zhu Yong, Hongru Jin, and Michael McMahon were arrested Wednesday and will be arraigned later in the day. Rong Jing and Zheng Congying in California will appear in court on Wednesday, while Zhu Feng, Hu Ji, and Li Minjun remain at large, authorities said.

The DOJ and FBI further stipulated that the CCP doesn’t rely on Interpol or other international law enforcement but instead engages “in clandestine, unsanctioned, and illegal conduct within the United States and facilitated the travel of [CCP] officials (PRC officials) to U.S. soil in order to further carry out these illegal acts” between 2016 and 2019.

In one instance, several of the defendants—along with CCP officials—attempted to bring the victim’s elderly father from China to the United States against the father’s will in April 2017 to “use surprise arrival of his elderly father to threaten and attempt to coerce” the victim to go back to China, where he would presumably face punishment, said the FBI and DOJ.

Officials said that Zhu Feng, Hu Ji, Li Minjun, Hongru Jin, and Zhu Yong worked with McMahon, a private investigator, to obtain intelligence about the victim and his location in New Jersey.

One of the defendants and an unidentified co-conspirator allegedly put a note on the victim’s home, saying: “If you are willing to go back to the mainland and spend 10 years in prison, your wife and children will be all right. That’s the end of this matter!”

The federal officials said that the case is not isolated, saying that the CCP directed its operatives to coerce other people in the United States between 2016 and 2019. U.S. officials have expressed warnings about the regime’s Operation Fox Hunt, saying it is a “rogue law enforcement” operation aimed at critics or dissidents.