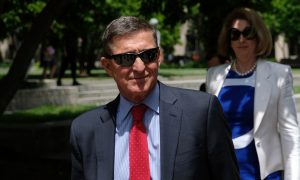 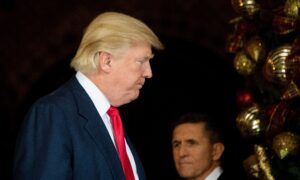 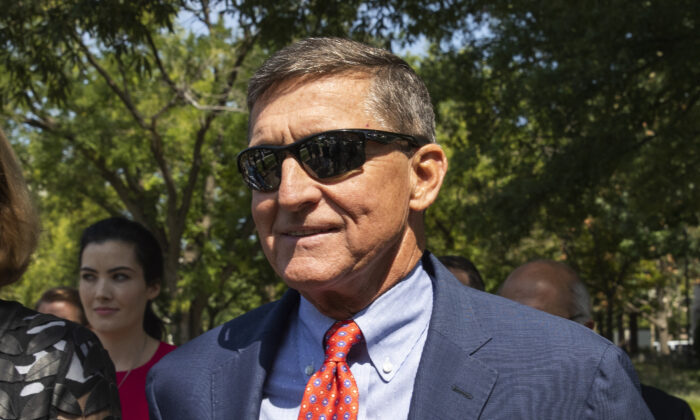 “The Government has concluded that the interview of Mr. Flynn was untethered to, and unjustified by, the FBI’s counterintelligence investigation into Mr. Flynn—a no longer justifiably predicated investigation that the FBI had, in the Bureau’s own words, prepared to close because it had yielded an ‘absence of any derogatory information,’” said Timothy Shea, interim U.S. attorney for the District of Columbia, in his May 6 motion to dismiss (pdf).

Since the government wasn’t “persuaded” that the FBI interviewed Flynn with “a legitimate investigative basis,” Flynn’s guilty plea was irrelevant—to be a crime, a lie needs to be “material,” which means it has to have “probative weight” on the investigated matter, Shea said.

“Moreover, we not believe that the Government can prove either the relevant false statements or their materiality beyond a reasonable doubt.”

The Flynn case has been a focus for criticism among Trump supporters against a number of mostly former top FBI officials involved in the investigation dubbed Crossfire Hurricane.

The probe, launched in 2016, was to determine whether the Trump campaign colluded with Russia to sway the presidential election. It was taken over in May 2017 by a special counsel, former FBI Director Robert Mueller, who concluded in March 2019 that the probe was unable to establish any such collusion.

Several reviews of the Russia investigation uncovered a plethora of irregularities and malfeasance. At least some of the investigators themselves are currently under criminal investigation by U.S. Attorney John Durham.

Flynn responded to the news by posting on Twitter a video of his grandson reciting the Pledge of Allegiance.

“My grandson Travis…’and JUSTICE for ALL,’” the retired general wrote.

The dismissal of the Flynn case was recommended by Jeffrey Jensen, U.S. attorney for the Eastern District of Missouri, who was directed in January by Attorney General William Barr to perform a review of the case.

“I concluded the proper and just course was to dismiss the case,” Jensen said in a May 7 statement released by the DOJ. “I briefed Attorney General Barr on my findings, advised him on these conclusions, and he agreed.”

The move follows a recent release of documents that show the FBI was about to close the Flynn case on Jan. 4, 2017—nearly three weeks before the Flynn interview.

The purported basis was that Flynn allegedly voiced to Kislyak policy preferences of the incoming administration on several issues, including a request that Russia delay a United Nations vote on Israeli settlements and for Russia to only respond reciprocally to fresh sanctions imposed in late December 2016 by outgoing President Barack Obama.

The Logan Act, passed in 1799, prohibits Americans from conducting diplomacy on their own with countries that the United States has a dispute with. Only two people have ever been indicted for allegedly breaking it, the last one in 1852. Neither was convicted.

The investigation was never opened, as “discussions with the Department of Justice resulted in the general view that the Logan Act would be difficult to prosecute,” Shea said.

The Flynn–Kislyak calls “were entirely appropriate on their face” and “did not warrant either continuing that existing counterintelligence investigation or opening a new criminal investigation,” he said, noting that “such calls are not uncommon when incumbent public officials preparing for their oncoming duties seek to begin and build relationships with soon-to-be counterparts.”

The FBI had “word-for-word” transcripts of the calls, and there was nothing in them “to indicate an inappropriate relationship between Mr. Flynn and a foreign power,” Shea said.

“Indeed, Mr. Flynn’s request that Russia avoid ‘escalating’ tensions in response to U.S. sanctions in an effort to mollify geopolitical tensions was consistent with him advocating for, not against, the interests of the United States.”

Instead of opening a new investigation based on the Logan Act, then-head of FBI counterintelligence operations Peter Strzok worked to keep the original counterintelligence investigation open on behalf of the “7th floor” on Jan. 4, 2017, as shown by contemporaneous text messages with then-FBI attorney Lisa Page, who was at the time his mistress as well as special counsel to Andrew McCabe, then-deputy director of the bureau.

About a week later, information about the Flynn–Kislyak calls began to be leaked to the media while speculation that Flynn violated the Logan Act circulated. Flynn then denied to several members of the incoming Trump administration that he discussed the sanctions with Kislyak.

A number of top officials in the DOJ and the intelligence community argued that the Trump administration should be informed that Flynn didn’t describe the calls accurately. But then-FBI Director James Comey pushed back, according to Shea, and instead directed McCabe to send Strzok and another agent into the White House to interview Flynn without informing either the DOJ or the White House.

According to Shea, there was no justification for the interview.

“Whatever gaps in his memory Mr. Flynn might or might not reveal upon an interview regurgitating the content of those calls would not have implicated legitimate counterintelligence interests or somehow exposed Mr. Flynn as beholden to Russia,” he said.

Flynn agreed with McCabe’s interview request, saying the FBI already knew what was said in the Kislyak calls anyway. During the interview, he denied clear recollection of the request to Kislyak regarding the sanctions and denied asking for Russia to vote a certain way or delay the UN vote, the agents’ notes from the interview indicate.

Strzok and the other agent came away with the impression “that Flynn was not lying or did not think he was lying,” Strzok later told one of Mueller’s prosecutors.

“Under these circumstances, the Government cannot explain, much less prove to a jury beyond a reasonable doubt, how false statements are ‘material’ to an investigation that—as explained above—seems to have been undertaken only to elicit those very false statements and thereby criminalize Mr. Flynn,” Shea said.

In January, Flynn asked District Judge Emmet Sullivan, who presides over his case, to allow him to withdraw his original guilty plea. In a declaration to the court, Flynn asserted innocence, saying his plea statement is false and that he only signed it because of his former lawyers’ “ineffective counsel” and because prosecutors threatened to charge his son.

He’s accused his former lawyers, from the firm Covington and Burling, of keeping key information from him, including about the full scope of a conflict of interest the firm faced regarding the case.

Also, Shea said, Flynn had pleaded “without full awareness of the circumstances of the newly discovered, disclosed, or declassified information as to the FBI’s investigation of him.”

Covington and Burling had no comment when reached by The Epoch Times via email.

Flynn’s current lawyers, led by former Texas prosecutor Sidney Powell, have argued for months that the case should be dismissed for government misconduct and in the interest of justice.