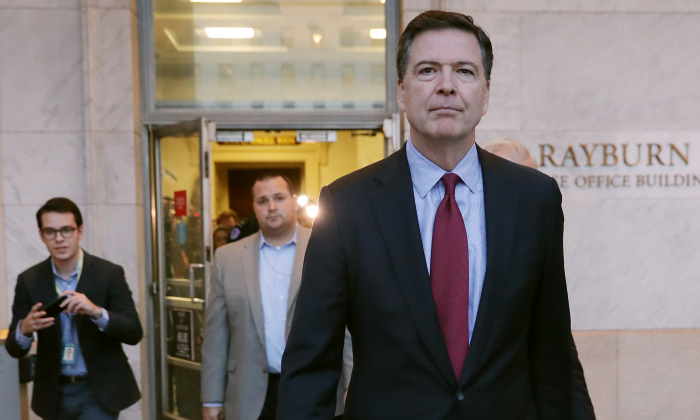 A declassified Jan. 7 order, released by Presiding FISA Court Judge James Boasberg, revealed that the Department of Justice (DOJ) has determined that two of the four FISA surveillance applications on former Trump 2016 presidential campaign adviser Carter Page were “not valid.”

The court wrote that it had received notice of “material misstatements and omissions” in the Foreign Intelligence Surveillance Act (FISA) applications made on Page, apparently with respect to the final two FISA renewals. The court also noted that the DOJ had made the assessment that with regard to the two applications, “there was insufficient predication to establish probable cause to believe that [Carter] Page was acting as an agent of a foreign power.”

Surveillance of American citizens is supposed to be tightly controlled by FISA law, and probable cause that one is acting “as an agent of a foreign power” is a prerequisite for a Title I FISA application, such as the one Page found himself subject to.

The order noted that the “FBI has agreed to sequester all collection the FBI acquired pursuant to the Court’s authorizations” of the two now-invalid FISAs, “pending further review of the OIG Report and the outcome of related investigations and any litigation.”

The order also notes that while the DOJ hasn’t yet made a determination on the validity of the first two FISA applications, the DOJ intends to have the FBI sequester information relating to those first two orders “in the same manner as information acquired” in the final two renewals that have now been determined to be invalid.

The order by Boasberg closed with a series of demands for disclosure regarding the manner in which the government will be handling the information collected under the now-invalid Page FISAs, along with updates on any ongoing investigations.

Typically, FISA renewals would be expected to be supported by additional information and details, and would, therefore, build upon and make a stronger case than the original application. The fact that this doesn’t appear to be the case calls into question the ongoing validity of the original FISA and the first renewal as well.

The finding by the DOJ that the final two Page FISA renewals were “not valid” appears to stem from the recent report by DOJ Inspector General Michael Horowitz, which identified “at least 17 significant errors or omissions in the Page FISA applications, and many additional errors in the Woods Procedures. These errors and omissions resulted from case agents providing wrong or incomplete information to the OI (Office of Intelligence) and failing to flag important issues for discussion.”

The IG’s report also stated, “While we did not find documentary or testimonial evidence of intentional misconduct on the part of the case agents who assisted OI in preparing the applications, or the agents and supervisors who performed the Woods Procedures, we also did not receive satisfactory explanations for the errors or problems we identified.”

The IG report was highly critical of the actions taken by the FBI during the counterintelligence investigation of the Trump campaign and directly challenged the processes, oversight, and leadership within the FBI.

“That so many basic and fundamental errors were made by three separate, hand-picked teams on one of the most sensitive FBI investigations that was briefed to the highest levels within the FBI and that FBI officials expected would eventually be subjected to close scrutiny, raised significant questions regarding the FBI chain of command’s management and supervision of the FISA process,” the report states.

According to a Feb. 28, 2018, letter to the IG sent by Sen. Charles Grassley (R-Iowa), the last two FISA renewals on Page took place on April 7, 2017, and June 29, 2017, respectively. This means that both of these FISAs were in place during the period in which former FBI Director Robert Mueller was in place as special counsel. An important question is whether Mueller or anyone on his team had access to the information that’s now been deemed to have been illegally obtained.

Another important question to be addressed is what, if any, information was collected on other secondary parties using the “two-hop” rule, while the two now-invalid and illegal FISAs were in place.

Notably, The New York Times reported on Jan. 16 that Comey is now under investigation by federal prosecutors regarding the possibility that “Comey illegally provided details to reporters” in 2017. An August 2019 IG report concluded that “Comey’s retention, handling, and dissemination of certain Memos violated Department and FBI policies, and his FBI Employment Agreement.”

The U.S. attorney’s office in Washington is already conducting a formal investigation of McCabe that began nearly two years ago. He was fired in March 2018 for lying to the DOJ inspector general and is currently the subject of a criminal grand jury investigation.

This raises the issue of potential criminal wrongdoing on the part of officials who disseminated information from what can now be deemed illegal surveillance of Page during these time frames. The final sentence in this statement is fully redacted in the FISA Court order.

Rosenstein, who, as deputy attorney general, signed the final FISA, previously discussed his signing of the FISA during a June 28, 2018, House testimony. Rosenstein drew a distinction between those authorized to sign the application, such as himself, and those who prepare the application and who attest to its accuracy.

Rosenstein was asked by Rep. Matt Gaetz (R-Fla.) about his review of the Page FISA and the overall FISA process.

“I’ve reviewed that one in some detail, and I can tell you the information about that doesn’t match with my understanding of the one that I signed, but I think it’s appropriate to let that Inspector General complete that investigation. These are serious allegations. I don’t do the investigation—I’m not the affiant. I’m reviewing the finished product, sir,” Rosenstein said.

Earlier this month, it was disclosed that it was Rosenstein who authorized the DOJ to make the initial December 2017 release of the texts sent by former FBI Agent Peter Strzok and former FBI lawyer Lisa Page.