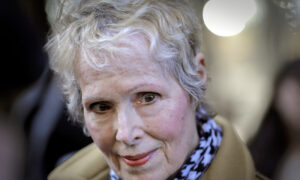 The Justice Department (DOJ) had considered taking action against officials of Portland, Oregon, after consecutive nights of rioting in the city caused widespread destruction to federal property and injuries, a spokesperson said on Thursday.

DOJ spokesperson Kerri Kupec told the Associated Press and Fox News that the department had explored whether it could pursue criminal and civil charges against Portland officials for their handling of the violent rioting that erupted in the wake of George Floyd’s death.

Kupec did not comment on whether any charges would be brought and which particular city officials were being considered. The office of Portland Mayor and Police Commissioner Ted Wheeler did not immediately respond to The Epoch Times’ request for comment.

Meanwhile, the DOJ did not immediately respond to The Epoch Times’ questions regarding the potential legal actions.

Portland had seen persistent civil unrest and rioting for months, which had caused dozens of injuries and a death, as violent demonstrators and law enforcement clashed around a federal courthouse. President Donald Trump and administration officials have accused state and local officials of not fulfilling their duties to protect federal property, prompting the federal government to deploy agents to quell the unrest.

At least 100 people have been federally charged in Portland in the last few months.

The FBI had also indicated that it would investigate “specific violations of federal law” and that it will target violent acts and property destruction in the Portland riots.

Last week, Wheeler announced that Portland police officers were no longer allowed to use tear gas to control crowds during protests and riots. He also called for the community to stop the violence, which the city has seen since late May.

The Portland Police Bureau responded in a statement that banning the law use of tear gas would make it “very difficult to address this kind of violence without resorting to much higher levels of physical force,” which would “elevated risk of serious injury to members of the public and officers.”

“CS gas is a tool which has been used sparingly in the last 104 nights. We want to clear up a misconception that it is being used as crowd control. It is not. It is being used to disperse crowds only when there is a life safety event. Most recently, it was used to disperse a crowd from which a Molotov cocktail was thrown at officers and ended up injuring a community member who was on fire. We understand that this gas seeped into nearby homes and that is not something we desire,” the bureau said. CS gas is another name for tear gas.