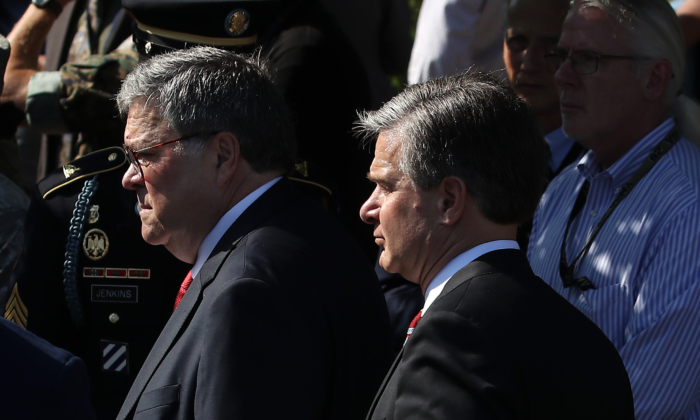 The Justice Department (DOJ) campaign to counter the Chinese Communist Party’s multifaceted onslaught on U.S. interests has ramped up to an unprecedented level, according to government officials and documents.

As of February, the FBI was conducting roughly 1,000 investigations into China’s attempted theft of trade secrets, just one of many fronts in the communist regime’s wide-ranging campaign against the United States. Every FBI field office was working on trade-secret theft cases involving China, with potential victims spanning almost every sector and industry, according to FBI Director Christopher Wray.

With the DOJ and the FBI under relentless partisan fire over politically charged domestic investigations dating back to the 2016 presidential election, the initiative to counteract the offensive by the Chinese Communist Party (CCP) has ramped up to a historic scale while going largely unnoticed. According to a review of DOJ press releases, the department has brought more indictments related to Chinese infiltration since 2019 than during the entire eight years of the Obama administration.

“We believe that no country poses a greater threat than communist China,” John Brown, an assistant director at the FBI, said during a Feb. 6 conference. “From our vantage point, the United States has not faced a similar threat like this since the Soviet Union and the Cold War.

“Today, investigations related to the government of China make up a greater percentage of our counterintelligence workload than at any other time in the FBI’s history.”

In November 2018, then-Attorney General Jeff Sessions launched the effort—formally known as the China Initiative—shortly before he submitted his resignation. The Trump administration’s efforts in the matter had already ramped up prior to the formal launch. Sessions noted that no one was charged with spying for China during the last four years of the Obama administration and that the Trump administration indicted four alleged spies in 2017 alone.

Sessions directed the DOJ to focus on a range of priorities related to Chinese infiltration, including identifying key trade-secret theft cases, developing a strategy to go after non-traditional intelligence collectors being co-opted by the communist regime, and to applying the Foreign Agents Registration Act against unregistered agents advancing the Chinese regime’s interests.

Since then, federal law enforcement authorities have brought charges on a number of landmark cases. The most recent indictments as part of the initiative provide a glimpse into the variety of methods the communist regime is using to steal from the United States. On Jan. 28, the DOJ charged a senior Harvard professor, a Chinese student at Boston University, and a Chinese researcher working at a medical center in Boston. The indictments exemplified how the Chinese regime is using a variety of approaches to target U.S. academic and research facilities.

The Harvard professor, Charles Lieber, was charged with lying to federal authorities about being paid $50,000 a month through China’s Thousand Talents program. The Boston University student allegedly lied about being a member of China’s People’s Liberation Army. The researcher allegedly stole vials containing cancer research from Beth Israel Deaconess Medical Center and attempted to smuggle them into China.

The Chinese Communist Party made its ambitions public five years ago upon the announcement of its “Made in China 2025” plan, a whole-of-society push to make China the world leader in information technology, robotics, green energy, aerospace, and other industries. According to senior U.S. officials, China’s progress toward the goal has primarily relied on theft of innovation from the United States.

“The Chinese government is fighting a generational fight to surpass our country in economic and technological leadership. But not through legitimate innovation, not through fair and lawful competition, and not by giving their citizens the freedom of thought and speech and creativity we treasure here in the United States,” Wray said. “Instead, they’ve shown that they’re willing to steal their way up the economic ladder at our expense.”

Since the 2015 announcement of the Made in China 2025 plan, the DOJ has brought trade-secret theft cases in 8 of the 10 technology sectors China is aspiring to dominate. The central planning under the communist regime stifles innovation, making the rapid advances called for by the China 2025 plan impossible without the systematic theft of trade secrets. The DOJ’s focus on the issue thus cuts to the core of the Chinese regime’s central plan for global domination.

While the number of FBI technology theft cases involving China has been on the rise since 2003, the investigations yielded just nine prosecutions during the eight years of the Obama administration, according to a review of DOJ indictments. By comparison, the Trump administration has already brought charges in 12 trade-secret theft cases.

“In the past, prior administrations and many in the private sector have too often been willing to countenance China’s hardball tactics,” Attorney General William Barr said on Feb. 6. “It has been this administration that has finally moved to confront and counteract China’s playbook.”

While the number of total prosecutions is relatively small, the FBI and DOJ see the cases as a tool to motivate the private sector to take action. According to U.S. Attorney Andrew Lelling, of the five U.S. attorneys assigned to the China Initiative, the recent prosecutions in the academic field are meant to jolt private-sector universities to wake up to the threat from China and tighten internal measures.

The China Initiative has ramped up alongside the Trump administration’s other efforts to counteract China, including the trade war and the escalation in the struggle against Chinese counterfeits.

Many of the cases the FBI is investigating are based on leads from companies in the private sector. According to senior law enforcement officials, private companies are reluctant to state publicly that they’ve been victimized by the Chinese regime, fearing repercussions to their business in China. Retaliation tactics include trumped-up antitrust charges against U.S. companies in China.

According to Trevor Loudon, an expert on communist infiltration of the United States, the DOJ’s campaign to counteract the China threat is unprecedented, even in comparison to the investigative activity during the Cold War with the Soviet Union. The FBI caseload against Soviet agents and so-called fellow travelers was spread out over many years and consisted largely of surveillance which rarely resulted in formal charges.

“This is pretty unprecedented. Even at the height of the Cold War, there were never more than a few dozen cases,” Loudon said.

Marc Ruskin, a former FBI special agent, pointed out that 1,000 cases spread across 56 FBI field offices is no staggering number. But he suggested that the total number may be higher considering the FBI’s need to protect the integrity of investigations and to avoid tipping off suspects.

“There might be 5,000 cases. The public statements [Wray] is going to be able to make are influenced by security and strategic considerations,” Ruskin said.

The prosecutions since 2018 suggest that the DOJ has broadened the range of charges it’s willing to bring in cases related to Chinese infiltration. Espionage and trade-secret cases are relatively difficult to prove, and the U.S. government has shown it’s willing to work around the issue by bringing white-collar charges. Lieber, the Harvard professor, was charged with lying about his affiliation with a Chinese university. Last year, an associate professor at the University of Kansas was charged with wire fraud and program fraud for allegedly hiding the fact that he was working for a Chinese university.

“The bureau has shifted to using non-traditional tools in investigating and mitigating the activities of hostile intelligence services,” Ruskin said.

Diana West, an expert on communist sabotage of the United States, said that while the increase in investigations and prosecutions is great, much more needs to be done to counteract China from the perspective of policy.

“I think the proof is always in the indictments, the arrests, which never really seem to address the problem at the scale that is ongoing,” West said, referring to the many investigations of atomic espionage dating back decades that have gone unprosecuted.

“When you actually see government policy changing or cases going to court, this becomes more of a measure of the government taking things seriously.”

According to U.S. Attorney Jay Town, one of the legislative changes the DOJ may benefit from is an amendment to the Foreign Agents Registration Act that would expand the definition of a foreign agent beyond political activity to include research on behalf of a foreign government.

“I do think it would be important to at least have sort of a point one, where it does apply not just to political activity but perhaps would apply to research activity and some other things and give some real teeth to what the president and what this Justice Department is trying to accomplish with prosecuting these individuals who are taking these grant moneys and perhaps using them for a nefarious purpose,” Town said on Feb. 6.