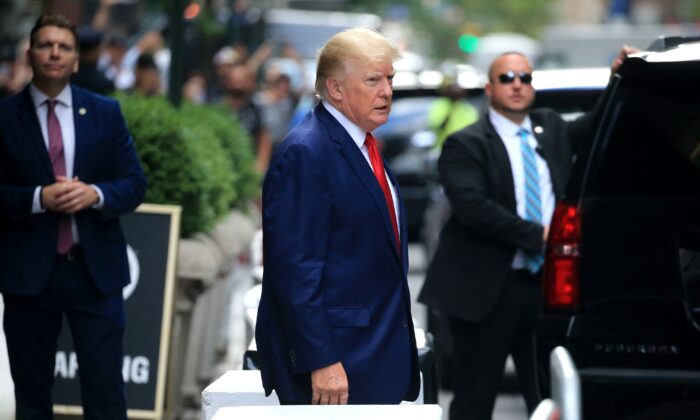 DOJ Alleges More Classified Records May Be at Mar-a-Lago

They made the allegation in a court filing Thursday in arguing against the appointment of a special master, or an independent third party, to review the documents that were taken during the unprecedented search of Trump’s Mar-a-Lago residence last month. Earlier this week, a federal judge sided with Trump’s team in granting their request for a special master.

“The injunction against using classified records in the criminal investigation could impede efforts to identify the existence of any additional classified records that are not being properly stored—which itself presents the potential for ongoing risk to national security,” they wrote in the latest filing.

And without a stay of the injunction, “the government and the public will also suffer irreparable harm from the undue delay to the criminal investigation,” DOJ prosecutors wrote.

The federal agency did not provide specific evidence or details as to why it believes more classified records are being kept at Mar-a-Lago.

They argued that some allegedly classified records that were taken from Trump’s home should be in the possession of the DOJ and FBI for review as the two agencies continue their investigation. The former president, according to a warrant released last month, is under investigation for possible obstruction of justice charges and Espionage Act violations.

Trump said the raid targeting his home was politically motivated and designed to harm his chances if he runs for president in 2024. At the same time, the former commander-in-chef has said he had a standing declassification order while he was president, and he pointed to an executive order issued in mid-January 2021.

“This motion is limited to … the seized classified records because those aspects of the order will cause the most immediate and serious harms to the government and the public,” the DOJ also said in its court filing.

The judge, an appointee of Trump, said the special master will review documents not just covered by attorney-client privilege, but any records possibly covered by executive privilege as well. Executive privilege is a legal doctrine that can shield some presidential records from disclosure.

The Justice Department has challenged the logic of using executive privilege because Trump does not own the records and is no longer president.

But Cannon wrote Monday that she agreed with Trump’s concerns about leaks to the media about the case, adding that such alleged actions will harm the former president. Also in the Monday order, she allowed U.S. intelligence officials to review all of the seized materials as part of their ongoing national security damage assessment.

The DOJ, however, stated that the FBI is part of the 17-agency Intelligence Community and said the “ongoing Intelligence Community classification review and assessment are closely interconnected with—and cannot be readily separated from—areas of inquiry of DOJ’s and the FBI’s ongoing criminal investigation.”

Prosecutors asked Judge Aileen Cannon for a ruling by Sept. 15. If she denies their request, they intend to file an appeal to the Atlanta-based 11th U.S. Circuit Court of Appeals, where six of the 11 active judges are Trump appointees. In an order on Thursday evening, Cannon gave Trump’s lawyers until Monday morning to respond to the government’s request.

The Epoch Times has contacted a Trump spokesperson for comment.