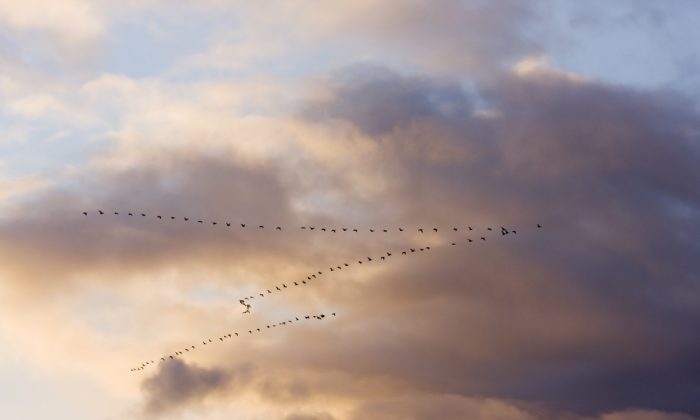 Doing Maths on the Fly, Birds Form V for Efficiency

Across the globe, hundreds of species of birds can be seen flying in V-formations. We have long suspected that these formation might help birds fly with less effort. Yet the precise mechanics have remained unknown – until now.

Expending less effort in long flights can be the difference between life and death for migratory birds. Higher efficiency saves precious fuel needed for journeys that can often be thousands of kilometres long. Cyclists in Tour de France know this well.

These cyclists ride in a group called the peloton where the leader plows through the onrushing air, while teammates riding behind him burn fewer calories. After some time, the leader swaps places to spread out the effort among the group.

Just like cyclists, it might seem intuitive that birds do the same when flying in a V-formation. But flying is complicated by the fact that birds flap their wings, which changes how the air flows around them.

Aerodynamic theory predicts birds should save energy if they carefully adjust their position and flapping speed in a formation. This made some scientists question whether birds have the required sensory precision to achieve this feat in mid-air.

In a study just published in Nature, an international team led by Steven Portugal of the Royal Veterinary College in London shows that birds defy these expectations: they really can fine-tune their flight formations to be more efficient.

As the crow flies

When a bird flies, it creates spinning loops of air behind it called vortices. Part of the vortex system pushes air upwards– known as upwash – while the opposite side of the vortex pushes air downwards – known as downwash. To fly with less effort, a bird should time its flapping to press its wings through the upwash created by the bird in front of it. It also wants to avoid the downwash.

The research was done using rare northern bald ibises. These large birds are the subject of a special conservation program to reintroduce them to the wild. Those used in the study hatched at Zoo Vienna, Austria, in March 2011, and were “imprinted” with human foster parents, which allowed the humans to train them in basic survival skills, just as their real parents would have. This they could achieve, because some birds get “imprinted” by the first suitable moving object they encounter during a critical period shortly after hatching. They then follow and learn from this surrogate like they would from a biological parent.

At four months, the birds began doing training flights behind an ultralight aircraft. They were then led along a migration route from Austria to Italy, the route they would then follow in the future when released into the wild.

The ibises were fitted with tiny location loggers and their flight filmed. They flew in formation with one another, following the path set by the paraplane. When the flapping speed and positioning of the birds was analysed after the journey, Portugal found the timing matched what theory predicts the birds should use to maximise their efficiency.

The team used ibises because they had special access to captive-raised birds, but other birds probably use the same trick when they fly in formation. How these birds are able to sense and predict such subtle changes in air flow is still a mystery.

It may be that birds have sensory abilities we weren’t previously aware of. It might also be that ibises, and possibly other birds, have an innate ability to do the required mathematics, quite literally, on the fly: judging the distance to the next bird and counting wingbeat cycles as they go. Either way, it is clear that birds still have a lot to teach us about their abilities and success as flying animals.

Michael Habib does not work for, consult to, own shares in or receive funding from any company or organisation that would benefit from this article, and has no relevant affiliations.

*Image of birds flying in v-formation via Shutterstock.