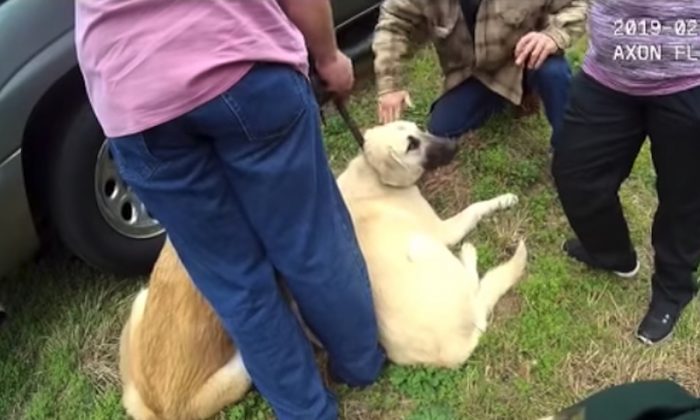 The two dogs that kept two small children away from the cars on the highway, on Feb. 16, 2019. (Okaloosa Sheriff)
US News

Two dogs helped keep two small children safe when they went “chasing rainbows” on a Florida highway after their foster father was unable to follow them when they walked off.

According to the Okaloosa County Sheriff, the children were seen by witnesses in the emergency lane of the I-10 highway, together with two dogs on Feb. 16.

When deputies pulled up to investigate, they met the good Samaritans who had already checked in on the children.

Eyewitnesses told the sheriff, recorded on bodycam, that when they found them, the dogs—Great Pyrenees/shepherd mixes—were keeping their flock of two safe pushing the children back against the guardrail when they would move toward the interstate.

“Whenever they tried to go forward, they would push them back,” one of the eyewitnesses told the sheriff. “The dogs were between them and the rails—they would not let them pass through.”

The dogs showed no aggression when they approached them, the man can be heard saying, and stayed between the children and the road the whole time as the people used their belts to make leads.

“We started talking to the children. Then we realized one had no shoes. And they were wet. So we stuck them in the car and turned the heater on—and at that time I was calling you guys,” the man told the sheriff.

According to MyPanHandle deputies determined that the children had been playing in their yard with other children when they walked away. Their foster father called for them to return, but was unable to follow them due to an ambulatory condition.

Deputies said that one of the children said she went off because she was trying to chase a rainbow.

Earlier this month, two other loyal Florida dogs saved a woman’s life by running to a neighbor’s home for help after their owner had a stroke.

Maureen Hatcher collapsed at her home in St. John’s, Florida, on Dec. 3, 2018, while taking a shower.

Bella and Sadie—both Labrador retrievers—rushed next door to prompt neighbor Alexandra Naspolini to check on the distressed Hatcher.