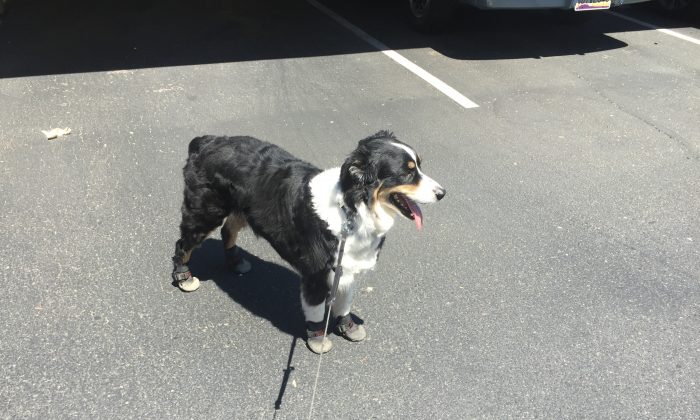 A dog that went missing in Idaho has been discovered in Memphis, Tennessee, several months later, WFMY News reported.

“I was devastated,” Lisa Corbett, the owner of the dog, told the station, adding that she “spent forever choosing this doggie.”

The dog, named Jake, went missing from her home in Boise. Corbett went door to door and asked neighbors if they had seen the animal and printed out fliers and posted them around town. The woman also paid $100 to a website to send an alert for her missing pup, but Corbett later learned she was scammed.

She believed Jake, a dog she raised from a puppy, would eventually wander home, but he never came.

Friends and neighbors suggested to her—after several months—that she should move on after the dog was still missing. “I just haven’t given up,” she said. “Not a bit. Never.”

A day before Thanksgiving, Nov. 22, the dog turned up at Grace Animal Hospital in Memphis, Tennessee, located some 1,800 miles east-southeast of Boise.

A woman in Memphis spotted Jake wandering the streets at night, and he jumped in her car when she opened the door, East Idaho News reported. The woman then took Jake to a veterinarian.

Veterinarians were able to trace Jake to Corbett because the animal was microchipped.

It’s not clear how Jake got to Tennessee from Idaho, but Corbett thinks he was stolen from her yard.

Corbett then traveled to Memphis on Thanksgiving and was reunited with the dog the next day, the report said. “Now he’s with me, and I’m complete again,” she said.

According to East Idaho News, a person messaged Corbett on Facebook saying they had picked up a hitchhiker near Boise who was traveling with a dog. The hitchhiker was on his way to Kentucky, and the person dropped him and the dog off in Memphis.

Corbett said the dog is in good health, although it had gotten fatter.

“This guy is like a Disney character,” she said of the dog’s disposition. “He’s so friendly, he’s way too friendly.”

In a similar case, a New York dog was found near Tampa, Florida, 18 months after disappearing. The dog was reported missing in Brooklyn, New York, according to The Associated Press.

The dog, named Sinatra, once belonged to 16-year-old Zion Willis, who died in a gun accident in Brooklyn, New York. Sinatra will be reunited with her family in Baltimore on Sunday.

The Tampa Bay Times reports that Rose Verrill and her family searched for the owner with the help from a friend, Jeanne Baldi. An identification chip provided a possible owner’s name, but the phone number was a digit off. Baldi turned to social media and found Zion’s father, Lesmore. He says they searched for months for Sinatra and were overcome when they learned their daughter’s beloved pet was coming home.

Stand by for return details – should be happening soon11.9.18 VILLAGE – WE NEED YOUR HELP!!!! LOOKING FOR…

The dog was also microchipped, according to a local Facebook page about missing dogs.