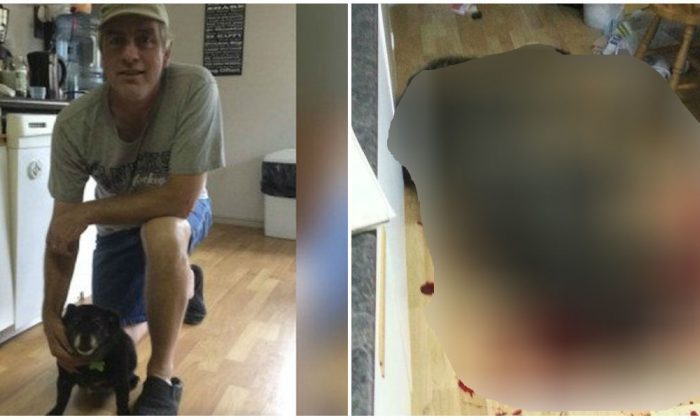 *WARNING: This story contains graphic content at the bottom of the page that might be too much for some readers*
By Epoch Newsroom
biggersmaller
Print

A British Columbia family was woken up by an unwanted guest who came into their home.

Niki and Mark Traverse were woken up by their dog, a Jack Russell terrier named Sid, at around 5 a.m. The dog was scratching at their door. She told the CBC what happened: “My dog was at our bedroom door going crazy. Losing his mind. I’ve never heard him bark like that.”

When Niki put on her robe and walked down the hall, she said saw a gigantic grizzly bear in her kitchen: “It started eating cat food and dog food. Didn’t even touch the garbage.”

Find out how this dog and this man stopped a grizzly bear dead in their Kimberley home http://t.co/P9EERffjMs pic.twitter.com/7sqZrWqUj6

Niki then went back into her room, and told her husband. Mark then grabbed his gun. He told the broadcaster: “I went to the kitchen, turned the light on and where the bear was, he came at me and I took a shot.”

He added: “By the time I reloaded the gun, he took a step more towards me, and I took another shot and he hit the floor, and he was still moving, so put another one in him, and that was the end of him.

Officials who arrived at the home determined the bear was a 15-year-old male that showed signs of malnourishment and bad heath.

Niki said: “I just freaking lost it.  I was so scared. I don’t eat the meat, but thank God I am married to a hunter.”

They took a photo of the dead bear (WARNING–It may be graphic for some):

Officials said the bear probably learned behavior prior to the incident:

“The actions of this bear suggest that it had developed this learned behavior prior to this incident this morning and has likely done this before,” conservation officer Jared Connatty told GlobalNews.