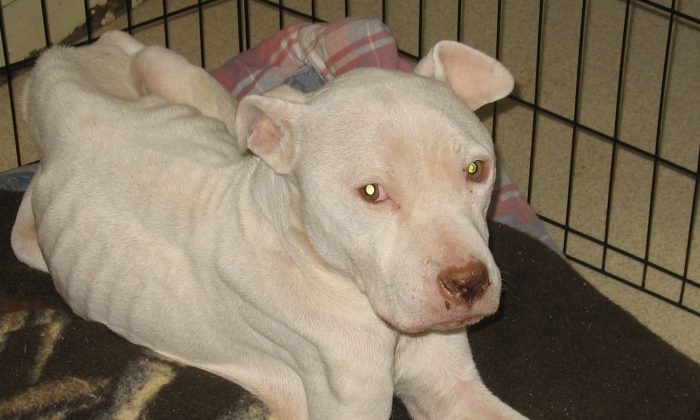 A dog found on the side of the road in Deerpark in an emaciated and ailing condition has died after emergency medical treatment, the Humane Society of Port Jervis and Deerpark reported.

The white pit bull terrier, who staff nicknamed Sweet Sally for her disposition, was found on beside Route 209 and 3rd Street in Cuddebackville in a rainstorm on Feb. 24 and brought to the Humane Society by a good Samaritan.

The Humane Society said in a press release she weighed just 28 pounds and was so weak she could not stand on her own. Her body temperature was low and she was dehydrated. Staff thought she might not have eaten for “at least” several weeks.

She was taken to Oradell Animal Hospital in Paramus, New Jersey, where she was given fluids, vitamins, and antibiotics. However, her liver and kidneys were not functioning, and veterinarians said they could do nothing more for her. She died on Feb. 28 in the hospital.

“It is with heavy hearts and great sadness that we announce Sweet Sally passed away,” the Humane Society said in a press release. “She was a very good patient and this gentle dog seemed to know that the strangers surrounding her were there to help ease her suffering.”

An autopsy is being done to glean any information they can about what caused her condition.

This gentle dog seemed to know that the strangers surrounding her were there to help ease her suffering.
— The Humane Society of Port Jervis and Deerpark

The Town of Deerpark police are searching for the owner(s) of the dog and ask that anyone with information contact them at 845-856-4333.  “All calls will be kept confidential,” the Department said in a press release.

The Humane Society said it will give a “substantial reward” to anyone with information that leads to the arrest and conviction of the person(s) responsible for the dog’s maltreatment.