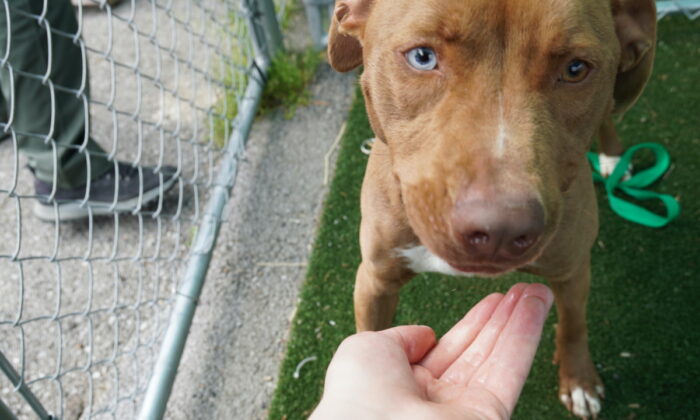 EAST RIDGE, Tenn.—Merry, a brown pit bull at the East Ridge Animal Services shelter, is blissfully unaware of the nationwide political battles that rage around her existence.

A beautifully muscular dog, she dashes around the shelter’s visitor enclosure. Occasionally, she leaps to grab a treat from Caroline Smith, an East Ridge animal control officer.

“It is kind of nice to be in a smaller shelter because we’re able to bond with them,” animal control officer Crystal Reno said of the animals under her care.

The shelter found Merry near Christmastime, Reno said. Eight of the shelter’s 15 dogs are pit bulls, according to shelter staff.

It’s hard to get pit bulls adopted. Smith said she’s never been bitten by a pit bull and that small dogs tend to bite more often. But several factors have turned pit bulls into America’s most controversial dog.

The public tends to panic over “bad” breeds, even when there’s nothing wrong with them, Smith said.

The debate over pit bulls is in many ways a debate over the significance of a breed. Pit bull advocates say that a pit bull is no different from any other dog, while pit bull opponents say that the breed’s history has made it uniquely aggressive.

Changing American attitudes about animals have made the resulting fight over pit bulls particularly vicious, many participants say.

According to Smith, the American public today tends to think of animals as if they were people. This change has helped counter animal abuse.

“Now dogs are like your children. Sometimes people look at dogs as a part of the family,” she said.

But the public also tends to see animal control officers as threats to animals, Smith said. Even if East Ridge is a no-kill shelter, people tend to worry whether it will help the animals it saves.

“If I had one dollar for every time someone asked me, ‘Are you going to kill it?’ I would be rich,” she said.

In this atmosphere, debates over animals, how to treat them, and whether to euthanize them can raise strong feelings.

“A lot of people think that we’re just out to get their animals,” animal control officer Leigh Stacy said. “We would rather educate you and make your animal stay with you.”

In online arguments over pit bulls, many people seem incapable of describing an animal with instincts, benefits, and drawbacks.

The humanizing of pit bulls has spread the pit bull debate to wider audiences, according to activist Colleen Lynn. Lynn founded Dogsbite.org, one of America’s leading anti-pit bull websites.

In 2007, when Lynn first started in pit bull activism, debates over pit bulls were already vicious. But the debaters have since changed, she said. At first, pro-pit bull groups were mainly dog breeders, pit bull owners, and dog-fighting criminals, she said.

“I was dealing with super hard-core groups,” she said.

“The lobby went from these hardcore people to this much broader ‘Let’s rescue them, let’s rehabilitate them’ motivation,” she said.

Lynn entered the fight to ban pit bulls after she was attacked by one in Seattle, she said. When she jogged past a woman with a leashed pit bull, it jumped to attack her.

The dog bit her arm and held the bite for a few seconds before letting go, Lynn said, but the experience was one of the most terrifying moments of her life.

Because the pit bull escaped its leash on public property, the owner agreed to euthanize the dog to avoid a fine, according to Lynn. But she didn’t legally have to do so.

After the attack, Lynn researched pit bulls and the laws that surround them. She said local governments should sterilize all pit bulls except those whose owners have special permits.

“It meets the pit bulls’ owners halfway,” Lynn said. “I think it’s responsible from a human standpoint and from a humane standpoint.”

“This type of dog needs to be eliminated,” he said.

Both Phillips and Lynn cite pit bull attack statistics as a key reason to control the breed. Although pit bulls make up about 6 percent of U.S. dogs, they’re responsible for 65 percent of fatal attacks from 2005 to 2017, according to statistics collected by Dogsbite.com.

Although other dogs tend to bite the nearest limb, pit bulls usually go for the throat and face, Phillips said. They also hold on when other dogs let go.

“The dog, one day, for no apparent reason, flips out and kills this person or mauls that person,” he said. “Pit bulls do that. The other dogs don’t.”

Pit bull advocates argue that these statistics are fundamentally misleading.

According to a study by the University of Florida College of Veterinary Medicine, even trained veterinary staff can only identify genetic pit bulls from appearance between 33 and 75 percent of the time.

Pit bull advocates say that most of the time, the media misidentifies all aggressive dogs as pit bulls. This mistake could create the impression that pit bulls are more violent than other types of dogs.

Although pit bulls make up a high percentage of dog attacks, pit bull attacks are a comparatively tiny issue. Pit bulls kill an average of 28 people per year.

Other websites state that violent pit bulls are only aggressive because they have bad masters. Pit bulls are the most likely dog to be abused, and abused dogs are more likely to attack people.

“Some abused dogs may become overly aggressive, as they will try to defend themselves whenever they identify a possible threat,” according to VetInfo.com.

Although The Epoch Times contacted multiple pro-pit bull websites, none of them responded to requests for an interview by press time.

Dog Households, Both Alike in Dignity

Both sides of the pit bull debate have treated each other cruelly at times.

Lynn said she has received hate mail for her positions on pit bulls. Pro-pit bull social media pages told the Epoch Times that they often face trolling attempts. Buzzfeed has described the pit bull debate as the “most vicious conflict on the internet.”

The consequence of this unending online brawl is a nationwide political battle. With moves involving activist pressure on local, state, and federal levels of government, pit bull law is an ever-changing environment.

Animal control officers disagree about how effective these laws are. Stacy said she doesn’t like BSLs.

“They can go from zero to 60 in a split second,” she said of pit bulls. “I am always in favor of an outright ban.”

Heenan researched the potential effect of BSLs on Salisbury and concluded that they would greatly improve the city’s dog bite problem.

But she admitted that her preferred legislation was very unpopular among dog owners. If BSLs aren’t plausible, she said she would settle for pit bull laws that demanded secure enclosures and muzzles while in public.

“If you go for a walk down the street, your dog has to have a muzzle that’s going to prevent it from being able to bite or attack anybody even if it gets away from you,” Heenan said.

Even without a ban on pit bulls, animal laws already make it too easy for biting dogs to bite again, she said. In Salisbury, a dog had to attack three times before it was declared dangerous.

“Legislators have no idea how dogs work. That’s the biggest problem,” Heenan said.

But pro-pit bull activists hotly contest these claims. Many organizations, including the American Dog Owner’s Association, American Kennel Club, and the Centers for Disease Control and Prevention, don’t endorse BSLs.

The American Veterinary Medical Association says these laws don’t work because any dog can bite, breeds are hard to determine, and BSLs discriminate against responsible dog owners.

Laws that punish chronically irresponsible dog owners would be a better solution to the problem of dog attacks, the association wrote on its website.

“While BSL may look good on the surface, it is not a reliable or effective solution for dog bite prevention,” the website reads.

“There’s clearly a trend of repeals going on across the U.S.,” she said, adding that their winning legal strategy has been to pass state-level bans on local anti-pit bull laws.

For example, the city of Pawtucket in Rhode Island once had a pit bull ban, but state leaders passed a law that overturned all local bans.

“Those laws have been ongoing pretty much en masse every legislative season since 2012,” Lynn said.

This same strategy applies to the national level, she said. The 2021 National Defense Authorization Act had a clause that prohibited all military housing from having breed-specific dog restrictions. But anti-pit bull activists successfully lobbied for its removal.

Lobbying groups are also pressuring Congress to pass laws that make insurers charge the same rates for all dogs, regardless of their size or level of aggression, Lynn said.

One of the key goals of Best Friends, a group that shelters stray animals, is in favor of the United States becoming a “no-kill nation” by 2025. This would mean shelters could kill only 10 percent or less of the animals that arrive there.

To reach this figure, dog owners will have to adopt many animals that would otherwise be euthanized, Lynn said. And decreased restrictions on dog breeds might help increase adoption numbers.

“I don’t quite understand the passion behind their cause,” Lynn said. “You can’t achieve a 90 percent save rate and put down pit bulls for safety. Pit bulls have been a thorn in the side of no-kill since day one.”

In East Ridge, animal adoptions have suffered during COVID-19, Reno said. Not only were people less willing to adopt dogs, but some people were no longer financially well-off enough to own the dogs they had, she said.

Recently, Molly and Hatchet got lucky. A woman was willing to adopt them, Reno said.

Stacy, Smith, and Reno’s faces lit up as they started to celebrate.

But Molly and Hatchet are terriers. The shelter’s longest resident is a 7-year-old pit bull named Sally, who has been living there for about nine months.

In her cage, Sally barks fiercely, but the staff who know her say she’s friendly when she’s let out. The staff also say she wouldn’t do well with children.

“Sally has everything against her,” Smith said.

For now, Sally and many dogs like her are still waiting.