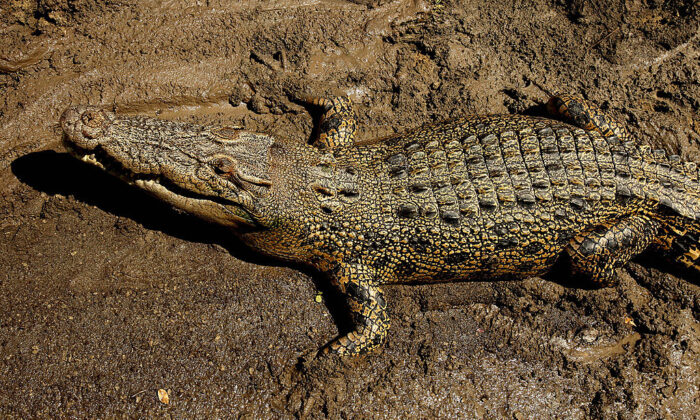 An estuarine crocodile better known as the saltwater or saltie, lies in the sun on the banks of the Adelaide river near Darwin in Australia's Northern Territory on Sept. 2, 2008. Greg Wood/AFP via Getty Images)
Australia

An Australian dog has narrowly escaped with its life after being bitten by a crocodile at Casuarina Beach in Darwin in the country’s north, NT News reported.

Banjo the Staffordshire terrier was out on a walk with his owner Tom Cummins at Casuarina Beach on Monday morning when the incident occurred.

Banjo was cooling off in the shallows when Cummins heard a yelp, and turned around to see his loyal friend in the jaws of a crocodile.

Cummins said that Banjo rose to the challenge and retaliated.

“He’s a fairly tough dog. He turned around and bit the croc,” he said.

The croc had apparently messed with the wrong mutt. It let Banjo go and he returned to the beach.

“He (Banjo) walked as if nothing happened. He has some pretty bad lacerations but the worst part was the pressure of the jaws.” Cummins said.

A visit to the vet confirmed that there were no serious injuries, but the lacerations will take a while to heal and will leave substantial scars.

“I’m sure he’ll pick up a lot of girls with those scars,” Cummins said.

Wildlife ranger Ian Hunt said it was a timely reminder for people to look out for themselves, their kids, and their pets while at the beach or near waterways.

“People need to be vigilant. Crocs can be in any waterway and along beachfronts,” he said.

Hunt said that in 2021 so far, 255 crocs, typically between two and three metres long, had been removed from the Darwin Crocodile Management Zone.

According to the Northern Territory government, this zone spans 50 kilometres and includes Darwin Harbour, Darwin rural area, and the western side of the Adelaide River.

In this zone there is no tolerance for saltwater crocodiles, meaning the “Croc Team” pursue all sightings, carry out spotlight surveillance, and manage 26 permanent traps, along with a further 34 traps depending on the season and number of sightings.

However, it is not an exclusion zone, so it can’t be assumed that the zone is always free of crocodiles. There is no barrier to keep crocs out of the zone, but the team remove every croc sighted within the zone.

Meanwhile, there are areas in certain parks that are managed to exclude saltwater crocodiles. This means that there is a high degree of confidence that the ancient reptiles cannot enter these zones and therefore the risk is low enough to permit swimming, but this usually depends on the season. Wangi Falls in  Litchfield National Park is one example.

Hunt reiterated that Banjo’s story serves as a warning.

“We don’t want to see this happening to loved ones or pets,” he said.