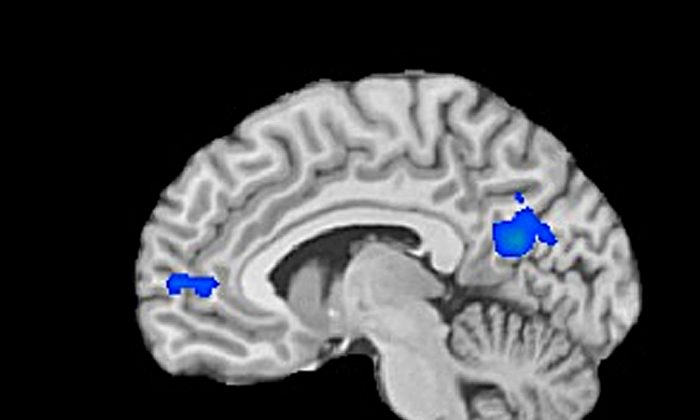 The areas shaded in blue highlight areas of decreased activity in the brains of meditators. (Yale University)
Beyond Science

Does Telepathy Conflict With Science?

Recently, journalist Steven Volk was surprised to discover that leading skeptical psychologist Richard Wiseman has admitted that the evidence for telepathy is so good that “by the standards of any other area of science, [telepathy] is proven.” Mr. Volk goes on to write, “Even more incredibly, as I report in Fringe-ology, another leading skeptic, Chris French, agrees with him.”

Mr. Volk might even be more surprised to learn that back in 1951 psychologist Donald Hebb wrote this:

“Why do we not accept ESP [extrasensory perception] as a psychological fact? [The Rhine Research Center] has offered enough evidence to have convinced us on almost any other issue … Personally, I do not accept ESP for a moment, because it does not make sense. My external criteria, both of physics and of physiology, say that ESP is not a fact despite the behavioral evidence that has been reported. I cannot see what other basis my colleagues have for rejecting it … Rhine may still turn out to be right, improbable as I think that is, and my own rejection of his view is—in the literal sense—prejudice.”

Four years later, George Price, then a research associate at the Department of Medicine at the University of Minnesota, published an article in the prestigious journal Science that began:

“Believers in psychic phenomena … appear to have won a decisive victory and virtually silenced opposition. … This victory is the result of careful experimentation and intelligent argumentation. Dozens of experimenters have obtained positive results in ESP experiments, and the mathematical procedures have been approved by leading statisticians. … Against all this evidence, almost the only defense remaining to the skeptical scientist is ignorance.”

But Price then argued, “ESP is incompatible with current scientific theory,” and asked:

“If, then, parapsychology and modern science are incompatible, why not reject parapsychology? … The choice is between believing in something ‘truly revolutionary’ and ‘radically contradictory to contemporary thought’ and believing in the occurrence of fraud and self-delusion. Which is more reasonable?”

So, here we have two skeptics in effect admitting that if this were any other field of inquiry then the experimental data would have carried the day by 1950.

Like Price and Hebb before them, both Wiseman and French hold that the claim of telepathy is so extraordinary that we need a greater level of evidence than we normally demand. Why should this be so? Most people believe in the reality of telepathy based on their own experiences, and are puzzled by the description of telepathy as “extraordinary.”

It is even more puzzling when surveys show that a large proportion of scientists accept the possibility that telepathy exists. Two surveys of over 500 scientists in one case and over 1,000 in another both found that the majority of respondents considered ESP “an established fact” or “a likely possibility”—56 percent in one and 67 percent in the other.

Polls such as this suggest that most scientists are curious and open-minded about psi. This, however, does not seem to be the case in one field: psychology. In the former study, only 3 percent of natural scientists considered ESP “an impossibility,” compared to 34 percent of psychologists.

In fact, the most prominent skeptics of psychic abilities today—such as Wiseman, French, James Alcock, Susan Blackmore, and Ray Hyman—are psychologists. An exception is biologist Richard Dawkins, but like Wiseman and French, he is also on record as saying that the existence of telepathy would “turn the laws of physics upside down.”

Failure to Jibe With Other Areas of Science?

But neither Alcock, Hebb, Wiseman, nor French ever bother to explain how the claims of parapsychology “stand in defiance” of science, or how “physics and physiology say that ESP is not a fact.”

Indeed, it is rare for a skeptic to ever back up this claim with specific examples. As I show in my new book “Science and Psychic Phenomena,” on those rare occasions that they do, they invariably invoke the principles of classical physics, which have been known to be fundamentally incorrect for more than three-quarters of a century.

Continued on the next page: Leading physicists have pointed out that what’s known of quantum mechanics doesn’t disqualify psi phenomena …