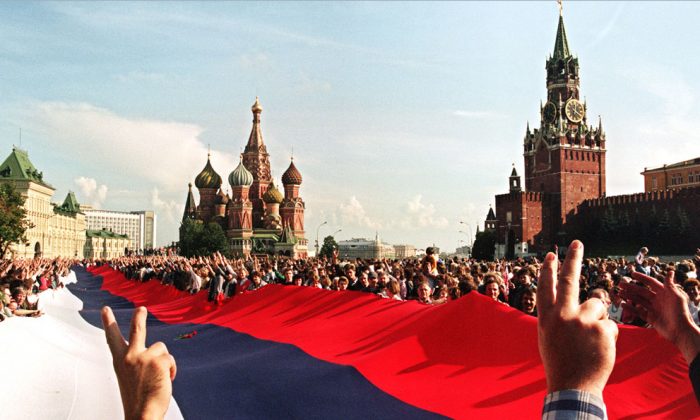 Celebrations in Moscow in August 1991 after the failure of a coup attempt by communist officials to remove reformist Soviet leader Mikhail Gorbachev. (AFP/EPA/Alain-Pierre Hovasse)
China

Does Praise of Russia’s Path to Democracy Hint at Reform in China?

In his recently published commentary article, Yu Keping, a member of a think tank that served former Chinese leader Hu Jintao, has challenged long-standing official narratives by casting a positive light on the Russian transition to democracy.

With its take on the democratic reforms started by Soviet leader Mikhail Gorbachev that ultimately led to the end of communism in Eastern Europe, the piece flies in the face of what China’s state-approved pundits and top officials have been saying for years: that introducing political freedom was a disastrous betrayal of international socialism.

“Following the disintegration of the Soviet Union, Russia embarked on political reformation in a democratically-oriented direction,” Yu writes.

Yu Keping, currently a professor at Peking University, has argued in favor of democracy since 2006, when the leader whose think tank he served, Hu Jintao, headed the Communist Party. In his most recent article, he argues that democracy is not just desirable, but inevitable.

In the verbose, bureaucratic-style writing of a state theoretician, Yu laid out a handful of key points in his piece, among them the observations that democracy was a “fundamental value of human society” and a “historical inevitability for all nations.”

Despite its deep roots as an autocratic great power, even Russia could not avert the turn toward democratic principles—the “irreversible and objective course of history,” Yu wrote.

Ever since the collapse of the Soviet Union and the release of its Eastern European satellites, China was left as one of the few states controlled by a communist regime. The process through which the Soviet Communist Party—which up through the 1950s was a close model for the Chinese regime—lost control over a superpower that dominated a sixth of the world’s landmass has been a subject of intensive study and warning in Chinese intellectual circles.

Most interpretations, at least those hitherto promoted in state media, have emphasized the grave mistake that Gorbachev made in allowing “glasnost,” or political openness—freedom of speech, press, demonstration, and the like.

“The wealth of interpretations and criticism Chinese scholars have heaped upon Russian democratization reflects not only their understanding of political reforms in Russia, but also their stance on Chinese political development,” Yu’s article says.

The Days When Beijing Was Free of Communist Rule

In principle, the Communist Party supports democracy and in its various propaganda mouthpieces describes China as a “consultative democracy,” whereby the Party’s control is supposedly necessary to make effective decisions for the common good.

With this in mind, Yu Keping’s statements are not necessarily indicative of any coming reform. Furthermore, Russia itself—while no longer a bastion of communism—is no shining example of transparent government or even functioning democratic institutions.

But some find the article to be worthy of close attention, given the context.

Xin Ziling, a retired Chinese military propagandist, told Epoch Times that Yu’s argument changes the politically accepted understanding of the Soviet collapse, and as such may be interpreted as a nuanced signal for top-down change under the current Chinese leadership.

“In the past, mainstream media always depicted Gorbachev’s reforms negatively, declaring it a betrayal of the socialist cause, and that his personal mistakes led to the disintegration of the Soviet Union,” Xin said. “We aren’t seeing these sorts of opinions anymore. They have been superseded by a recognition of the historical inevitability.”

Viewed in the context of broader Chinese politics, where seemingly minor signals can hint at potential shifts in the wind, Yu Keping’s article could be more than empty rhetoric.

Xin, a Beijing resident who has been previously placed under house arrest for voicing criticism of the Communist Party and defending the regime’s opponents, indicated that depicting Gorbachev’s policies positively would invite contemplation of the historical events that they brought about.

“As seen from a broader historical perspective, Gorbachev’s reform caused the disintegration of the Soviet Union as a part of the socialist bloc, as well as the manifest failure and extinction of Leninism and its set of things,” Xin said.

It may not be a coincidence: Xin thinks Xi Jinping, China’s current leader, is preparing for the eventual abandonment of Leninism and Bolshevism.

Yu has made previous pro-democracy statements, but in this instance, he is speaking concretely of the end of communism in Russia, and bucking the narrative on the official who brought that about.

His previous work appeared during a time when the Communist Party and Chinese state were dominated by a cabal associated with Jiang Zemin—the former leader who had nominally stepped down from his posts in the early 2000s. With the political system straitjacketed in this manner, all talk of actual change could not have amounted to much.

In a sea change since Xi Jinping came to power in 2013, the Jiang clique has been on the retreat, with many senior officials netted in an ongoing anti-corruption campaign. Caixin, the financial media group that published Yu’s article, is run by Hu Shuli, a close associate of Wang Qishan—the internal discipline chief of the Communist Party, arbiter of the anti-corruption campaign, and, by most accounts, Xi’s right-hand man.

Political reform in China would become feasible once Xi Jinping has consolidated power over the sprawling Party organs, Xin Ziling says. The effort, while directed from the top downwards, nevertheless would benefit from the support of the public and intellectuals.

“To successfully push forward a great reform and overthrow the past wrongdoing cannot be achieved without absolute authority,” Xin said.

“Remarks like those made by Yu Keping should be recognized. He has taken the lead, a proper role for the intelligentsia.”