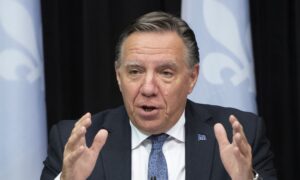 Does Ban on Assisted Suicide Protect or Violate Canadian Rights?

OTTAWA—The so-called “right to die” was back on Canada’s conscience Wednesday, Oct. 15 as the Supreme Court confronted the question of whether a ban on assisted suicide protects or violates the fundamental rights of Canadians.

Those arguing for a change in the law say public opinion has shifted dramatically in the over 20 years since Sue Rodriguez became a household name by taking her fight for a medically assisted death to the top court.

In 1993, the nine-justice panel was split; Wednesday’s submissions made it clear the issue remains as divisive as ever for medical practitioners, religious groups, and even advocates for the rights of the disabled.

Two different groups representing Canadians with disabilities appeared before the court, arguing opposite sides of the case.

The justices were sensitive to the resulting tension, as well as the notion that any one group—including the government—can claim to speak for what anyone wants or needs.

During submissions from one of the government lawyers, both Chief Justice Beverley McLachlin and Justice Rosie Abella interrupted to take issue with the language being used to describe the people at the heart of the case.

To say all disabled people “need protection, a leg up, different treatment—to treat them all the same—seems to be rather a stereotypical thing,” McLachlin said.

The justices are considering whether the ban violates the Charter of Rights and Freedoms, in part because while able-bodied Canadians can take their own lives, someone physically incapable of doing so would need help—and the helper would face legal repercussions.

The panel also raised the issue of who ought to have the right to an assisted death.

Though the plaintiffs argue it would be up to Parliament to determine the extent of a law allowing assisted death, they provided some conditions: the person would have to be a competent adult, acting voluntarily, and with an incurable medical condition that causes profound suffering.