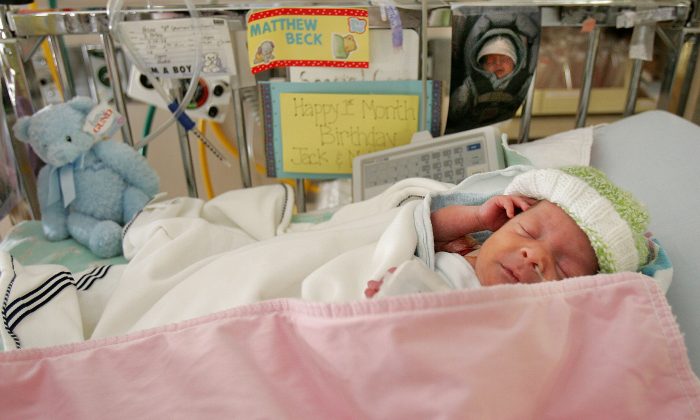 Premature baby Matthew Hirsh, born at 28 weeks, lies in the neonatal intensive care unit during a media tour for the March of Dimes' Prematurity Awareness Month at New York University Medical Center Nov. 10, 2004 in New York City. Because the United States, unlike other countries, includes premature babies in its calculation of infant mortality, statistics give a misleading picture of the nation’s health care. (Mario Tama/Getty Images)
Viewpoints

Does America Really Have the Worst Health System in the Developed World?

America spends twice as much on health care as its peers in the developed world, yet fares worse on a range of health indicators, including life expectancy and infant mortality.

That’s the finding of a new survey of 10 developed countries published by the Journal of the American Medical Association.

Surveys like these tend to point out that the United States spends a lot on health care but doesn’t appear to get much in return. A closer look, however, reveals that America’s seemingly poor performance is largely attributable to lifestyle and social factors—not the quality of the institutions that make up its health care system.

Take life expectancy. Americans live for 78.8 years, on average—less than the citizens of the other 10 developed nations examined in the JAMA study.

Several factors unrelated to our health care system explain Americans’ poor life expectancy. Our death rate from car crashes is more than double that of other high-income nations. The U.S. drug overdose death rate is higher as well; Americans are twice as likely as Brits and six times as likely as the French to die of overdoses.

Americans are also heavier than citizens of other nations. More than 70 percent of U.S. adults are either overweight or obese, which increases their risk of premature death.

None of these factors reflects the quality of America’s doctors or hospitals. Yet they all contribute to our low life expectancy.

Then there’s infant mortality. The JAMA analysis finds that America has the developed world’s highest infant mortality rate—5.8 per 1,000 live births, compared to an average of 3.6 per 1,000.

But this statistic is misleading. Countries record infant deaths differently.

In the United States, it’s standard practice to count any newborn showing the slightest evidence of life as a live birth. The Netherlands and France, by contrast, don’t count babies born before 22 weeks of gestation or weighing 1.1 pounds or less as live births.

By excluding premature and underweight babies, many of whom don’t survive, these countries artificially decrease their infant mortality rates.

Yet another deceptive indicator is the share of the population with health insurance. America’s 90 percent-insured rate falls short of the coverage rates in the other nations.

Insurance, however, is no guarantee of access to health care. In my native Canada, the median wait time for receiving treatment from a specialist after referral from a general practitioner soared to a record high of 21.2 weeks last year.

Patients in the United Kingdom’s single-payer system routinely wait for hours in hospital hallways—or even in the back of ambulances.

The American system is also much better at treating serious illnesses like cancer. Five-year survival rates for breast, colon, and prostate cancers are higher in the United States than in other developed countries like Canada, the United Kingdom, France, and Germany.

The U.S. health care system isn’t perfect. But it’s irresponsible to blame it for our nation’s comparatively low life expectancy and high infant mortality without acknowledging the societal factors behind those problems.

Sally C. Pipes is president, CEO, and Thomas W. Smith fellow in health care policy at the Pacific Research Institute. Her latest book, “The False Promise of Single-Payer Health Care” (Encounter), was released this spring. Follow her on Twitter @sallypipes