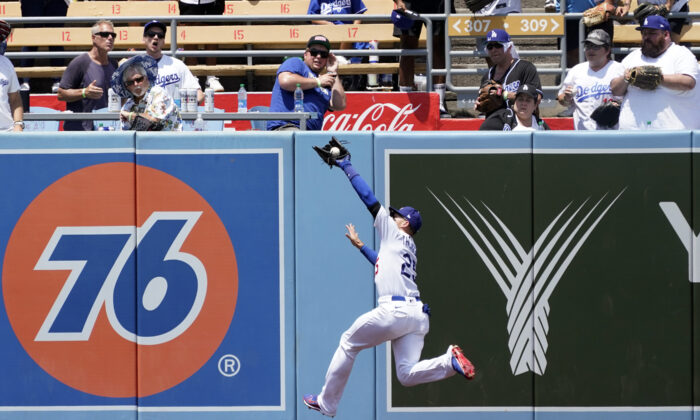 LOS ANGELES—The Washington Nationals’ hopes of pulling off one of the most improbable series sweeps in recent baseball history pretty much evaporated in the first inning.

After a two-day stumble, the Dodgers are back on track—and they’re getting healthier, too.

Hanser Alberto had a two-run double during the Dodgers’ six-run first inning, and Los Angeles emphatically avoided an improbable sweep by the majors’ worst team with a 7–1 victory Wednesday.

Gavin Lux had three hits and drove in two runs, while Mookie Betts reached base four times for the NL-leading Dodgers. Los Angeles had won 19 of 21 before curiously losing twice this week to the struggling Nationals.

“The first two games didn’t go how we wanted, but to get it rolling early (today) gave us a lot of momentum,” Lux said.

Justin Turner had an RBI single in the first inning of his return from an abdominal injury, and Los Angeles got even better injury news from the mound. Andrew Heaney threw four innings of scoreless, one-hit ball in his return from a lengthy absence for the finale of the Dodgers’ 5–2 homestand after hosting the All-Star Game.

“Getting those guys back is certainly helpful,” manager Dave Roberts said.

Although Heaney’s control wasn’t sharp after he cooled off during his teammates’ huge first inning, both the left-hander and Roberts were encouraged.

Heaney had pitched just once since April 17 due to shoulder problems, but he has been outstanding when healthy in his first season with the Dodgers: He lowered his ERA to 0.47 with three walks and four strikeouts while on a strict pitch count.

“I’m a little annoyed with myself for having a few long innings,” Heaney said. That puts a strain on the bullpen. …I haven’t pitched more than two games in a row this year, so I want to get into that flow.”

The Dodgers chased Nats starter Patrick Corbin when their first 10 batters combined for seven hits—two by Betts—and a walk while making just two outs on 45 pitches. Los Angeles scored all of its runs in the inning with two outs, and the rally continued when Victor Robles and Juan Soto allowed Lux’s fly ball to fall between them in right-center for a double.

Corbin (4–14) had the shortest start of his 11-year major league career, failing to get out of the first inning for the first time in his 250 starts.

“After the 40th pitch, I was getting a little worried,” Nats manager Dave Martinez said. “I didn’t want him to get hurt. …He’s throwing the ball well, but he’s just not finishing.”

Maikel Franco’s infield single leading off the third inning was the Nationals’ only hit until the seventh, when Luis García drove in their lone run with a ground-rule double.

Juan Soto went hitless amid another round of “Future Dodger!” chants in Chavez Ravine as Washington capped its six-game West Coast road trip by falling just short of its first four-game winning streak of the season.

“I’m proud of the team,” Martinez said. “Today we fell behind early, but we had a good series. We’ll come back and continue to play good, hard baseball.”

One day after the second-place Padres made up a game in the NL West race for the first time since July 3, the Dodgers calmly pushed their lead right back to 11 1/2 games as they head out on an eight-game road trip.

The Dodgers’ rally began with a leadoff double off the wall by Betts, who missed hitting a leadoff homer for the second consecutive day by a few feet. After the Washington outfielders’ big mistake, Betts beat out an infield single, forcing Martinez to pull Corbin.

Dodgers shortstop Trea Turner extended his hitting streak to 14 games with a double in the fourth. The All-Star has a hit in 83 of his 97 games this season.

Dodgers: RHP Brusdar Graterol (right shoulder) will throw a bullpen session this weekend in Colorado, Roberts said. …RHP Tommy Kahnle (right elbow) is unlikely to return before September. RHP Blake Treinen (right shoulder) could return in August, before the rosters expand. …Freddie Freeman singled and drew a walk before Jake Lamb replaced him at first base in the fifth inning to rest the six-time All-Star selection.

Nationals: After a day off, Aníbal Sánchez (0–2, 6.30 ERA) takes the mound Friday when Washington opens a three-game weekend home series against St. Louis.

Dodgers: All-Star Tyler Anderson (10–1, 2.79 ERA) takes the mound at Coors Field on Thursday to open a four-game series with the Colorado Rockies.