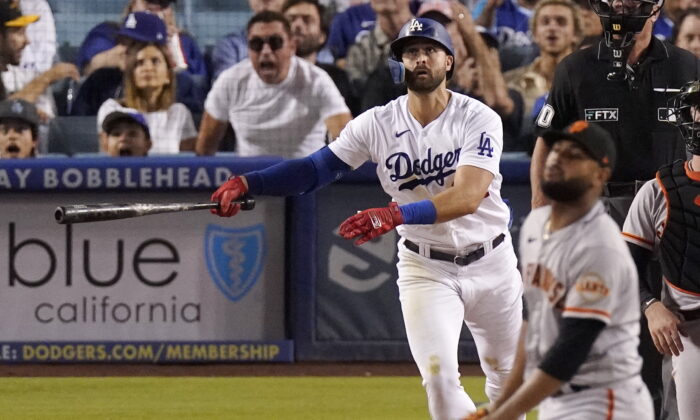 The NL West leaders improved to 11–4 against their rival this season. All of the game’s runs came on homers.

Craig Kimbrel pitched the ninth to earn his 22nd save.

Muncy doubled leading off the second and Justin Turner walked before Gallo’s 408-foot shot to the right-field pavilion off Jarlin García (1–4) put the Dodgers ahead, 3–1.

Gallo was acquired a month ago after a disastrous stint with the New York Yankees. The two-time All-Star’s homer was his fourth with the Dodgers and 16th overall.

He made a nifty diving catch in left field that saved two potential runs and ended the second.

The Dodgers extended their lead to 5–1 on Muncy’s two-out, two-run homer to the right-field pavilion on the first pitch from García in the third.

García gave up five runs and four hits in 1 2/3 innings. He struck out three and walked one.

Muncy went deep to the left-field pavilion against Dominic Leone leading off the sixth.

Lewis Brinson homered on the first pitch of the game and Brandon Crawford added a two-run shot in the sixth for the Giants, who had their four-game winning streak snapped a night after hitting five homers in a 7–4 victory.

Right-hander John Brebbia opened the bullpen game for the Giants, allowing one hit in one inning.

Giants: Reinstated C Joey Bart from seven-day concussion list for his start behind the plate.

Dodgers: RHP Tony Gonsolin (forearm) played catch again but has residual soreness. Manager Dave Roberts remains optimistic the 16-game winner can be “fully ramped up” in time for the postseason.

Giants: RHP Alex Cobb (5–6, 3.58 ERA) is enjoying a strong second half. He struck out seven against the Phillies in his last start.