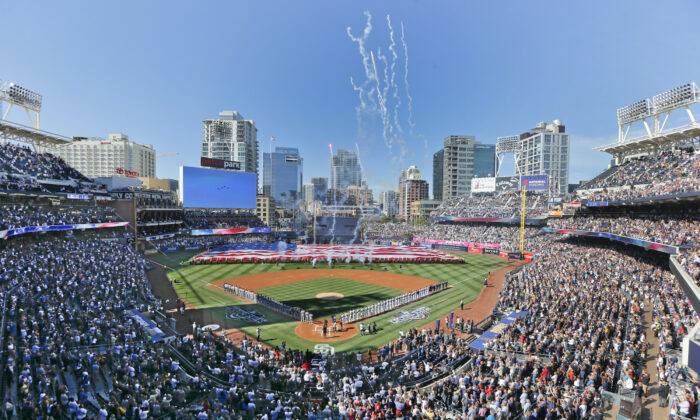 Opening day ceremonies are performed at Petco Park before a baseball game between the Los Angeles Dodgers and the San Diego Padres in San Diego, Calif., on April, 4, 2016. (Lenny Ignelzi/AP Photo)
Southern California

Recently acquired pitcher Max Scherzer also received a trophy for being the Washington Nationals’ nominee for the award, which recognizes the major league player who best represents baseball through extraordinary character, community involvement, philanthropy, and positive contributions, both on and off the field.

Each team nominates a player for the award which is decided by a panel that includes Commissioner Rob Manfred, representatives from MLB-affiliated networks (MLB Network, Fox Sports, ESPN, and TBS), MLB.com, as well as Clemente’s children, Enrique, Luis, and Roberto Clemente Jr.

Fans can vote for the Roberto Clemente Award at mlb.com/clemente21, which includes biographies of the nominees. The winner of the fan vote will count as one vote among those cast by the blue-ribbon panel.

Turner founded a foundation in 2016 that bears his name. The Justin Turner Foundation supports homeless veterans, children (and their families) battling life-altering illnesses and diseases, and various youth baseball
organizations.

This is Major League Baseball’s 20th annual Roberto Clemente Day, honoring the Hall of Fame outfielder killed in a plane crash on Dec. 31, 1972, while attempting to deliver supplies to earthquake victims in Nicaragua.

Major League Baseball announced Tuesday that Roberto Clemente Day will be celebrated on Sept. 15 in perpetuity.

In Wednesday’s game, Turner and Scherzer both wore Clemente’s number 21, as did Dodgers teammates Clayton Kershaw and Albert Pujols, the 2012 and 2008 Roberto Clemente Award recipients.

A special tribute video to Clemente was played in all major league stadiums in use Wednesday and the Roberto Clemente Day logo will appear on the bases and official dugout lineup cards.

The Brooklyn Dodgers signed Clemente in 1954 and he played that season for their Montreal International League affiliate where he was a teammate of future Dodgers manager and Hall of Famer Tommy Lasorda.

Under the rules of the time, players who received at least a $6,000 signing bonus who were not on a major league roster were subject to what is now known as the Rule 5 major league draft, in which the Pittsburgh Pirates made Clemente the first selection.

Clemente played his entire 18-season major league career with the Pirates, collecting 3,000 hits and winning four National League batting championships. He was selected for the All-Star Game 15 times and was a 12-time Gold Glove recipient.

Clemente was a member of Pirates’s teams that won the World Series in 1960 and 1971 and was selected as the Most Valuable Player of the 1971 World Series, where he hit .414 with five extra-base hits in 29 at-bats in Pittsburgh’s seven-game victory over the Baltimore Orioles.