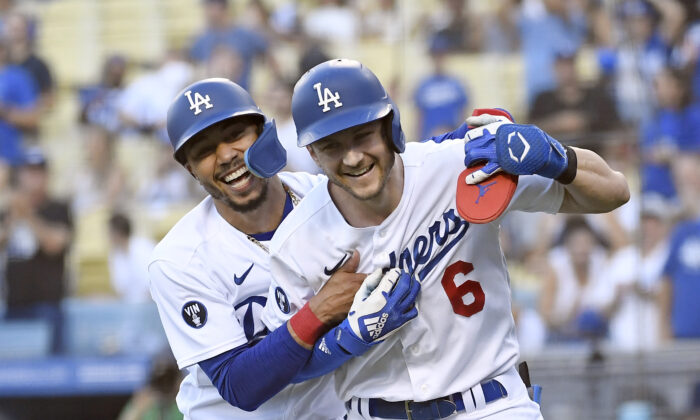 Trea Turner (6) of the Los Angeles Dodgers is congratulated by Mookie Betts (50) after hitting a two-run home run against starting pitcher Sean Manaea (55) of the San Diego Padres during the first inning at Dodger Stadium in Los Angeles, on Sept. 3, 2022. (Kevork Djansezian/Getty Images)
Baseball

Mookie Betts set his career high for home runs in a season and Julio Urias went six strong innings as the Los Angeles Dodgers earned a 12–1 victory over the visiting San Diego Padres on Saturday to end a three-game losing streak.

Trea Turner, Justin Turner and Will Smith also hit home runs as the Dodgers improved to 24–8 since July 31 despite their recent skid.

Manny Machado hit a home run for the Padres, while starter Sean Manaea (7–8) was roughed up for eight runs on nine hits and three home runs over 4 1/3 innings. San Diego saw its four-game winning streak come to an end.

The Dodgers got off to a fast start when Betts hit a leadoff triple in the first inning and Trea Turner followed with a home run to left field, his 19th.

The Dodgers took a 3–0 lead in the third inning on an RBI double from Smith that scored Freddie Freeman from first base, and they started to pour it on in the fourth.

Betts hit a three-run home run just over the left field wall, his 33rd of the season, to pass his previous high set in his MVP season of 2018 with the Boston Red Sox. The offensive production came with Betts starting at second base for just the third time this season.

The Dodgers pushed the advantage to 8–0 in the fifth inning when Freeman walked and Justin Turner hit a two-run home run to right-center, his 10th of the season and just his second since he returned from the injured list Aug. 9.

Urias (15–7) gave up one run on two hits with three walks and two strikeouts. His bid for a scoreless outing ended in the sixth when Machado hit a home run to left-center, his 26th.

The Dodgers’ offensive onslaught continued in their half of the sixth as Freeman had an RBI single and Smith hit a three-run home run, his 20th.

The Padres were without Brandon Drury, who is day-to-day after getting hit with a pitch Friday in the flap that extends off his batting helmet and over the left side of his face.