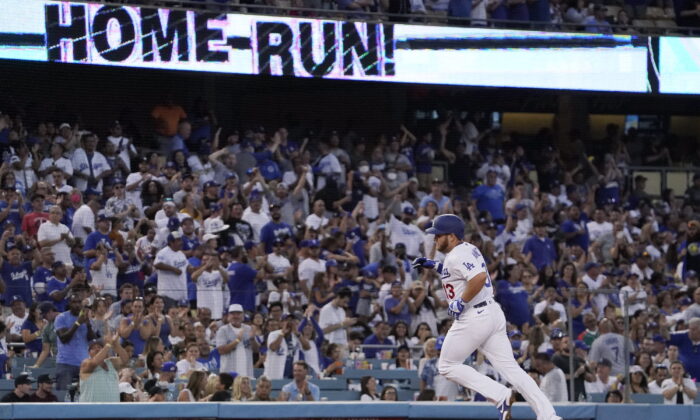 LOS ANGELES—Chris Taylor hit the go-ahead home run in the sixth inning, Joey Gallo added a three-run shot in the seventh and the Los Angeles Dodgers extended their season-high winning streak to 10 games with an 8–5 victory over the Minnesota Twins on Wednesday night.

It is the first time since July 2017 that the Dodgers have put together a double-digit winning streak. It is also their third straight series sweep and 14th of the season.

Max Muncy also went deep for Los Angeles, which has the majors’ best record at 77–33 and is 16 games in front of second-place San Diego in the NL West.

Jorge Polanco and Gary Sánchez homered for Minnesota (57–53), which fell out of the AL Central lead after its loss and Cleveland’s win at Detroit.

Taylor, who came off the injured list last Friday after missing 26 games with a broken left foot, gave the Dodgers a 5–4 advantage with his first home run since June 3, a solo shot to left field off reliever Michael Fulmer (4–5).

Gallo came on as a pinch hitter and provided some breathing room with a three-run drive to left-center. It was the Dodgers’ second pinch-hit homer of the season and the second of Gallo’s career.

David Price (1–0), the third of six Dodgers pitchers, got the win.

The Twins had a 4–2 lead in the fifth after a three-run homer by Polanco in the second and Sánchez’s solo shot in the fifth off starter Ryan Pepiot.

Mookie Betts started Los Angeles’ comeback with a double in the bottom half and he scored on Trea Turner’s single. Turner stole second and the Dodgers tied it at 4 on Will Smith’s RBI double.

Muncy led off the second by lining an elevated sinker from starter Sonny Gray over the right-field wall. Cody Bellinger extended the lead to 2–0 later in the inning when his sacrifice fly drove in Justin Turner.

Minnesota responded with a three-run third capped by Polanco’s drive to right field.

Freddie Freeman bobblehead night drew the largest crowd in the majors this season at 53,432. It was the Dodgers’ 13th sellout of the year.

Gray had given up only two earned runs in three starts since the All-Star break but ran into problems against the Dodgers. The right-hander went 4 2/3 innings, allowing four runs–three earned–and six hits. He struck out five.

Pepiot was called up for his fourth stint this season and allowed the leadoff hitter to reach base in four of five innings. Pepiot struck out four but gave up four runs and five hits in 4 1/3 innings.

The Twins dropped all four games to the Dodgers this season. Minnesota was outscored 32–10 and has lost 10 straight in the series dating to 2014.

Dodgers: RHP Dustin May will make one more rehab start for Triple-A Oklahoma City on Sunday before being activated off the injured list. Manager

Dave Roberts said May, who had Tommy John surgery 15 months ago, could likely pitch when Los Angeles returns home to face Miami in a weekend series beginning Aug. 19.

LHP Clayton Kershaw (back) did some light tossing during pregame workouts.

Twins: Remain in Southern California for a three-game series against the Angels. RHP Tyler Mahle (5–7, 4.49 ERA) makes his second start for Minnesota since being acquired from Cincinnati.