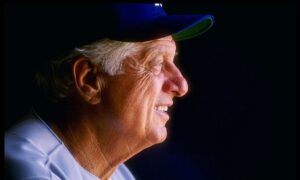 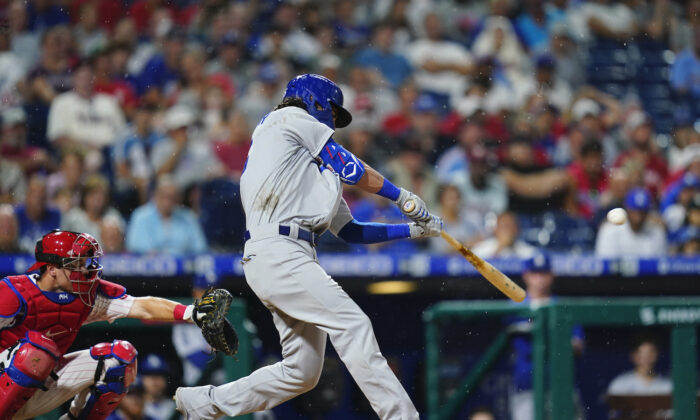 PHILADELPHIA—Cody Bellinger chopped ‘em foul, popped ’em foul and ripped ’em foul. One by one by one the foul balls sprayed—nine in all—until the Dodgers slugger found the sinker he wanted and knocked it in the seats.

Bellinger hit a two-run homer on the 13th pitch of an at-bat, connected later for another two-run shot and Los Angeles beat the Philadelphia Phillies 8-2 Aug. 11 on a second straight rainy night.

“I’m starting to feel strong and healthy,” Bellinger said. “I’m just grinding every day to make myself feel good and get ready for the game.”

The 2019 NL MVP might finally be out of his season-long slumber. Bellinger is riding an eight-game hitting streak, batting .333 (10 for 30) with two doubles, four homers, seven RBIs and a 1.175 OPS in that span.

The Phillies, who had an eight-game winning streak snapped Tuesday, fell into a tie for first place in the NL East with Atlanta’s win over Cincinnati. There are 48 games left this season.

They could have more pressing concerns: All-Star catcher J.T. Realmuto left in the first inning after he took two foul tips to his mask. Realmuto was checked on by team trainers but stayed in the game to catch the rest of the inning. Andrew Knapp pinch-hit for Realmuto, batting .268 with 13 home runs and 52 RBIs, in the first and caught the rest of the game.

Realmuto is day-to-day and went through MLB’s concussion protocols.

A night after a rain delay wasted a suburb outing from Aaron Nola, Phillies manager Joe Girardi tried to strategize against the weather and made a last-minute switch on the mound. He started reliever Connor Brogdon for an inning and brought in Hector Neris to pitch the second.

“He rolled with it,” Girardi said. “I just told him we would keep him posted and when we felt it was good to give him six innings, that’s when we would send him out there.”

The Phillies could have used more rain.

Bellinger fouled off six pitches in a row during his marathon at-bat against Gibson (8-4) in the fourth before lining a sinker to left-center to break a scoreless tie. Gibson said it was “as good a string of executed pitches as I threw all night.”

“I knew it was long,” Bellinger said.

Bellinger has five homers in his last 11 games.

Dodgers starter David Price added an RBI double for his first extra-base hit of the season and made it 3-0.

“That was really cool that I hit that. I’ve got my first double,” Price said.

Bellinger’s ninth homer of the season gave the Dodgers an 8-2 lead in the ninth. He also struck out three times.

The World Series champion Dodgers entered four games behind San Francisco in the NL West and would much rather win the division than face the prospect of a potential one-and-done wild-card game.

Though they can sweep the Phillies on Thursday, the Dodgers’ postseason road toughened a bit when they put star outfielder Mookie Betts on the injured list because of a sore right hip. He is batting .277 with 17 home runs and 44 RBIs in 87 games.

“It makes it a little more difficult, certainly, when you take out a player like that,” manager Dave Roberts said. “But we have lots of talented players. Do guys in both clubhouses, all clubhouses, scoreboard watch this time of year? Absolutely.”

Roberts saw LA’s lead grow on the scoreboard in the seventh when first baseman Alex Bohm botched a grounder for an error to let in one run and Knapp was charged with a passed ball to give them another. They scored three times and made it 6-2.