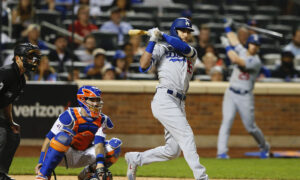 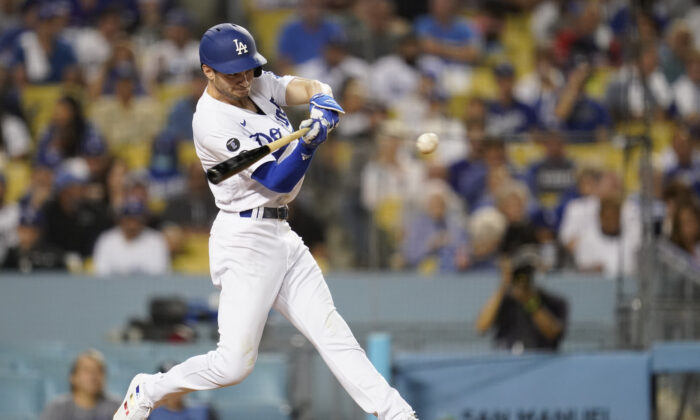 LOS ANGELES—Trea Turner is just about done getting comfortable with his new team. Now, he’s ready to make some major contributions.

Turner went 2 for 4 and drove in a run to lead the Los Angeles Dodgers past the New York Mets 4–1 on Thursday night for their seventh straight win.

The All-Star shortstop debuted with the Dodgers on Aug. 6 after being acquired at the trade deadline from Washington with pitcher Max Scherzer. Turner leads the National League in batting average at .320. He stole his league-leading 24th base in the fifth inning.

“The last few days I was trying to get things down, get the small things down—positioning, communication with guys around me, what to expect from the staff,” Turner said. “Then you can focus on the more important parts of the game.”

The Dodgers moved within 2 1/2 games of the NL West-leading San Francisco Giants, who were idle. The defending World Series champions haven’t been in first place since the end of April.

Blake Treinen polished off another bullpen game for the Dodgers by striking out the side to earn the save. He was one of seven relievers who combined to allow six hits while not issuing any walks.

“He’s just been so valuable,” manager Dave Roberts said. “Blake has been as valuable as Walker (Buehler).”

Corey Knebel made the first start of his major league career, working one inning and allowing one hit. Evan Phillips (1–0) came in as the 35th different pitcher used by LA this season. He allowed three hits in his second career victory. Victor González, Phil Bickford, Brusdar Graterol and Alex Vesia followed in setting up Treinen.

In consecutive bullpen games, LA relievers have allowed one run over 18 innings.

“The guys in the pen are just next-man-up ready when called upon,” Roberts said. “Guys are coming of age—Vesia, Bickford, some guys we didn’t really know much about.”

After slugging four homers a night earlier in sweeping Pittsburgh, the Dodgers cobbled together just enough offense against the reeling Mets.

AJ Pollock and Chris Taylor had RBI groundouts in the second to give the Dodgers a 2–0 lead.

Pete Alonso went 2 for 4 with a run scored for the Mets, who dropped below .500 with their sixth loss in seven games. They’ve lost 22 of their last 26 against the Dodgers, including a three-game sweep by LA in New York last weekend.

New York’s lone run came on J.D. Davis’ double into the left-field corner in the fourth.

“We were late on fastballs,” Mets manager Luis Rojas said. “The timing is a big thing. We got to be ready to hit early, then you can recognize pitches. We didn’t have any sequencing with the hitting to create a rally.”

Mets starter Taijuan Walker (7–8) gave up four runs and six hits in six innings. The right-hander struck out four and walked one. In his previous start last weekend against the Dodgers at Citi Field, Walker took a no-hitter into the seventh before surrendering a solo homer to Will Smith.

“We’re playing some really, really good teams right now,” Walker said. “It’s frustrating for us. We want to go out there and win ballgames, and we’re just not doing it right now. We’re trying to stay positive.”