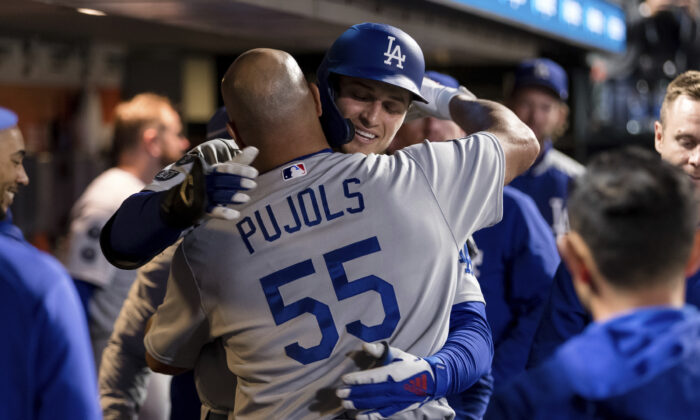 Los Angeles Dodgers' Corey Seager, back, celebrates with Albert Pujols (55) after hitting a solo home run against the San Francisco Giants in the ninth inning of a baseball game in San Francisco, on Sept. 4, 2021. (John Hefti/AP Photo)
Southern California

SAN FRANCISCO—Trea Turner and Corey Seager homered, Julio Urías won his seventh straight decision, and the Los Angeles Dodgers moved into a tie for first place with San Francisco atop the NL West Division with a 6-1 victory over the Giants on Saturday night.

A day after his throwing error from second allowed the winning run to score in Friday’s 3-2, 11-inning loss to San Francisco, Turner homered leading off the game to set the tone for the Dodgers’ fourth win in five contests.

“It’s over, it don’t matter,” Turner said. “It doesn’t matter if I made five errors yesterday, I had five strikeouts or if I hit five home runs. It doesn’t matter. For me, I try to move on as quick as possible whether it’s good or bad.”

Buster Posey was 3 for 4 with an RBI double for San Francisco, which lost for the fifth time in seven games.

The Dodgers have won 21 of their last 26 games. But Los Angeles suffered a key injury.

Left fielder A.J. Pollock left the game with a right hamstring strain after getting caught trying to stealing third to end the top of the first.

“From what I’m hearing early, it’s a Grade 2 strain. This is a couple 2-3 weeks at the minimum. We just have to see where he feels tomorrow.”

Urías (16-3) extended his lead as the winningest pitcher in the majors with another solid outing. The left-hander struck out eight, walked none, and gave up one run on eight hits in 5 2/3 innings.

“The bar has been raised for Julio,” Roberts said. “The way he goes deep in the games the expectation to win every time he takes the mound, being able to navigate and minimize damage … tonight he did that.

“When you don’t have everything working, to go out there and punch out eight and walk none is pretty impressive. This is where Julio has raised the bar for himself, and this is what we expect of him.”

Jay Jackson (2-1) started and took the loss. He gave up three runs in a third of an inning in a bullpen game in which the Giants used eight pitchers.

Jackson left a 1-0 game with two runners aboard on consecutive one-out walks to Mookie Betts and Justin Turner.

Both scored off Jarlin García.

After both runners advanced on a double steal, Corey Seager’s sacrifice fly scored Betts, and Turner scored on a double by A.J. Pollack.

Turner also scored on a balk in the top of the sixth, extending the Dodgers’ lead to 4-1. Turner reached on a one-out single and went to second on shortstop Mauricio Dubón’s throwing error. Turner took third on reliever Quintana’s wild pitch and scored when third base umpire Adam Hamari called a balk on the left-hander.

San Francisco’s only run came on a double by Posey in the bottom of the first inning.

Seager homered leading off the ninth to start a two-run inning.

A Giants team that’s delivered in clutch situations throughout the season was 1 for 8 with runners in scoring position and stranded nine baserunners.

“What I will say is the silver lining about not hitting with runners in scoring position … is it tends to change pretty quickly,” Giants manager Gabe Kapler said.

“You get one big hit and one big moment, and it tends to be fairly contagious. And we’ve seen that from our group throughout the season, but right now we’re just not, we’re not getting it done in the biggest moments.”