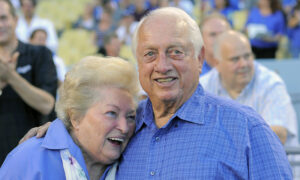 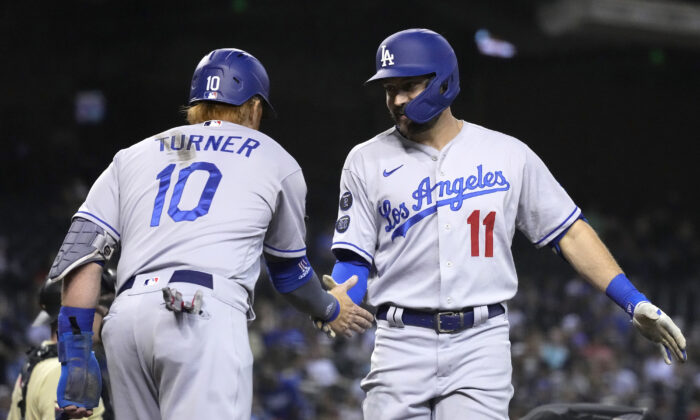 Gonsolin raised his arms in the air, then tipped his cap to Pollock.

It wasn’t the last time the Dodgers pitchers would get some big-time help from their defense on Sept. 24.

Pollock added a two-run homer, Chris Taylor robbed a pair of potential extra-base hits on defense in the ninth inning and the Dodgers kept pace in the NL West race by beating the Diamondbacks 4–2.

The Dodgers (99–55) remained one game back of the San Francisco Giants (100–54) with eight games left for both teams. The Giants also won Friday, beating the Rockies 7–2.

Pollock continued his 2021 excellence against his former team. The left fielder—who played for the Diamondbacks from 2012–18—was 19 of 38 (.500) with three homers and nine RBIs in nine games against Arizona coming into Friday.

The 33-year-old robbed Rojas of an extra-base hit with a leaping grab in the first and launched his 17th homer of the season to left center in the second. The two-run shot gave the Dodgers a 3–0 lead.

Pollock’s performance and some solid pitching allowed the Dodgers to continue their mastery over the Diamondbacks this season. Los Angeles has won 15 of 17 games and has a 119–46 scoring advantage in the series.

Jansen earned his 35th save.

Taylor—who was a defensive replacement for Pollock—helped his closer with a diving grab in left field for the first out of the ninth and another running grab for the second, sliding after he caught the ball deep in the corner.

“The diving play—if he doesn’t make that play—it’s a different inning and a different game,” Dodgers manager Dave Roberts said.

Said Pollock: “I’m not sure if I’m making that play—either one of those. We might still be playing.”