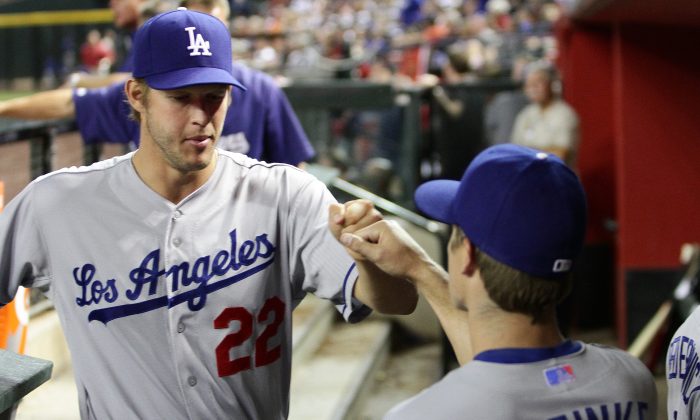 This latest hot streak is nothing new to Kershaw, though, who went 41 innings last year without giving up a run—it’s not even new to this year’s Dodgers franchise. Fellow ace Zack Greinke just had his own 45 2/3-innings streak snapped on July 26 against the Mets. (FYI, the record is 59 innings by another Dodger—Orel Hershiser.)

According to ESPN, the only other pair of teammates to have scoreless innings streaks of 35 innings or more in the same season were the 1908 Chicago Cubs, with the infamous Mordecai “Three Finger” Brown and Ed Reulbach. Incidentally, that marked the last time the lovable Cubs won the World Series.

In the modern era, though, has any team been able to trot out a more dominant pair of aces than what manager Don Mattingly and the Dodgers can throw out there?

Through Saturday’s action the former Cy Young winner Greinke, who currently sports a 10–2 record, has the best ERA in all of baseball at 1.41. Kershaw, who has led the NL in ERA four straight seasons, has seen his drop to 2.37—now fifth-best in the league. Should Greinke and Kershaw keep up their dominance, the duo could easily finished 1-2 in the Cy Young voting and terrorize opponents this fall in the playoffs.

Few teams in recent history can match that kind of talent.

Related Coverage
Why the Royals Had to Make the Cueto Deal