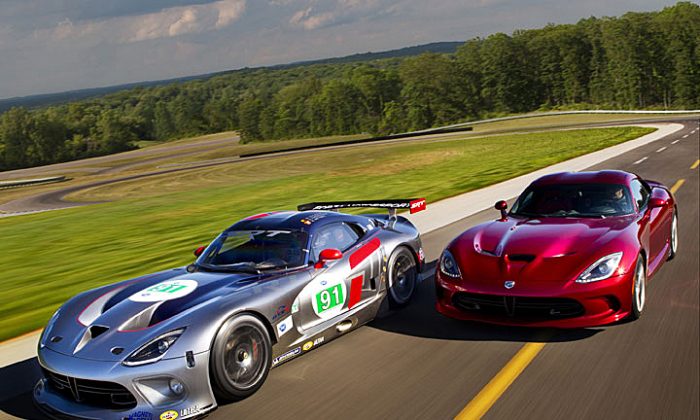 Dodge Viper Back in ALMS

The Dodge Viper is returning to racing in the American Le Mans Series, Chrysler officials announced at the New York Auto Show April 4.

The auto manufacturer unveiled two cars at the New York Auto Show: its road-going 2013 SRT Viper, and the race-ready SRT Viper GTS-R. The latter car should be hitting the track toward the end of the 2012 ALMS season.

“I don’t think it’s possible to overstate the significance of the SRT Viper returning to the top level of professional sports car racing,” said Scott Atherton, ALMS president and CEO, on the series website. “The Chrysler Group has a long, storied and very successful history of competing with the American Le Mans Series. We would be hard-pressed to come up with a better scenario than having the brand return with the simultaneous introduction of both the new production car and the competition version. What a great way for SRT Viper to come back to racing.”

“Racing has been a significant part of the illustrious history of Viper not only with significant wins on the track, but also in the continued development of the street cars—and our new 2013 SRT Viper models are proof of those lessons learned,” said Ralph Gilles, SRT president and CEO. “Now with our new team and the launch of the GTS-R, we’re excited and proud to begin writing more chapters in the racing history of the Viper later this summer.”

The Viper, America’s only rival to the iconic Chevrolet Corvette, was the dominant force in the ALMS GTS class through the first two years of the series. Campaigned by Hugues de Chaunac’s Viper Team Oreca, the car won the 1999 and 2000 GTS team trophy, the 2000 GTS manufacturer’s trophy, and gave driver Olivier Beretta—who went on to great success in Corvettes—his first two of five ALMS championships.

The two new Vipers will be driven by a team of Kuno Wittmer, Dominik Farnbacher, and Marc Goossens, with the fourth seat filled by the available star-of-the-week (IndyCar ace Ryan Hunter-Reay has tweeted that he will be driving the Viper when schedules don’t conflict.)

Kuno Wittmer has race wins in World Challenge and other series at the wheel of Viper; learning the new car won’t be hard for him. The 29-year-old Canadian has 13 years of racing experience in formula and GT cars and holds the lap record at Miller Motorsports Park—set in a Viper in 2011.

Dominik Farnbacher is a sports car fixture. He has a GT win in the Rolex 24, GT win in the Nürburgring 24, seconds in P2 and GT2 at Le Mans, second in the ALMS GT championship, winner of the Asian Le Mans Series. In 2011 Farnbacher set the production car record for the old Nürburgring—set in a Viper. The 27-year-old German native started karting in 1996, moved up to formula cars in 2001, and has been racing fast and powerful cars ever since.

Marc Goossens is the veteran of the team. At 42, this Belgian driver started winning endurance races before the other two started driving cars. He holds four wins in the Zolder 24, has competed in the Le Mans 24 11 times, in prototypes and GTs, and recently won the LMGTE-Pro class in the Six Hours of Le Castellet, despite a broken power-steering unit.

Goossens started karting in 1985, stepped up to Formula Fords in 1990, and then moved up to Formula 3 and sports cars. He has driven Corvettes, Pontiacs, Porsches, Ferraris, Astons, and all manner of prototypes, even NASCAR Cup cars—but never a Viper. Doubtless he will learn quickly.

The STR Viper will face stiff competition in the ALMS GT class, which offers probably the most competitive and most exciting GT racing anywhere on the planet. Corvette, Porsche, Ferrari, and Aston are set to face off again at the series’ next race, the Tequila Patrón American Le Mans Series at Long Beach on April 14. Tickets are available through the Toyota Grand Prix of Long Beach website. This would be a great event to catch, as IndyCar will be racing there the next day, and of course the atmosphere at Long Beach is unparalleled.

The race will be broadcast live on ESPN2 starting at 7:30 p.m. EDT. Qualifying will be streamed online at ESPN3 at 8 p.m. EDT Friday, April 13.